This week it was off to Peoria IL to make a visit to Caterpiller.

My opinion of Peoria has flip flopped through the years, first with my hating the place, then loving it, and then not liking it again. When I first started going there, I thought it was just a terribly boring place to go, with no places to have fun at, and no one to talk to. Then I met someone a few years ago and she showed me around. I thought that she was a great person, but I’d have to admit that I have forgotten her name at the moment – I’m gonna have to look through my blog to dig it up and give her a call the next time. Anyway, she showed me a couple of places to hang out that I enjoyed, and most of all, I enjoyed hanging out with her. One of the places that she took me to was a “straight” but friendly karaoke bar called the “Elbo Room”, and I went there several times. It was often full of younger people that I took to be university students, and also with folks from the nearby hospital. It was a nice and friendly crowd who didn’t care in the least if I got up to sing with a decidedly male voice.  Well, that all changed when the owner of the “Elbo Room” apparently got upset that people were starting to think of his bar as a “gay bar”, and he put up a sign stating something along the lines of “This is NOT a gay bar.”  Apparently that really upset a lot of locals who then came out to protest.
Even knowing about this event, I still returned to the Elbo Room – I can’t recall now if I did it as Matt or as Kim, but it was depressing either way. Gone was the young and fun crowd. The only people there looked to me as if they were homeless alcoholics. I tried the place yet again and had the same experience – only old drunks there. I was heartbroken. . .    It bothers me to this day that I might have been a factor in its decline – I certainly hope not but the thought still nags at me. 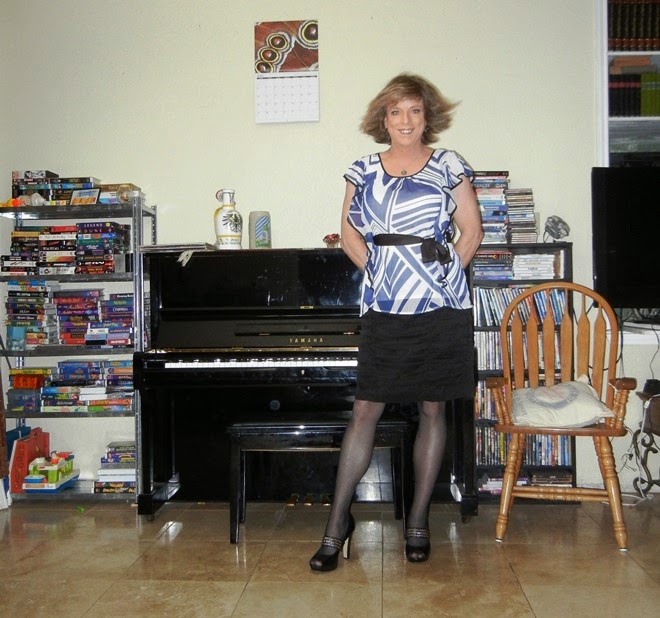 A lot of people accuse me of being brave, but in the Atlanta airport I saw someone who is much braver than I am. As I was stepping onto their tram to take me to my concourse, someone was stepping out of the car that made quite an impression on me. I honestly don’t know how to refer to them – as “him” or “her” so I hope that I don’t cause any offense, but “he” was making no attempt to hide the fact that he was male, so I will stick with that. Anyway, he had short and masculine hair, but was wearing a womans top and pants, dangly ear rings, and a little makeup. Now THAT is brave I think! I guess that I would consider him a very effeminate male and honestly have no idea if the person is actually transgender or not.

The night before I left Peoria for home, I was torn on how to fly home. I didn’t feel an overwhelming urge to do it as Kimberly, and the quick change and wash-up in the Austin airport are a royal pain in the butt, so I was really on the fence. I went so far as to shave my legs and get my outfit together, but I eventually decided that I was gonna fly as Matt. Well that all went out of the window when I woke up early the next morning to the sound of the people in the room above me rehearsing for “River Dance”, or so it seemed from the racket that they were making. I stared at the 5AM display on the clock for a few minutes before throwing in the towel and admitting that I wasn’t going to be able to go back to sleep. Well, I had plenty of time on my hands now, so I changed my mind yet again, and started hauling my makeup back out of my suitcase. 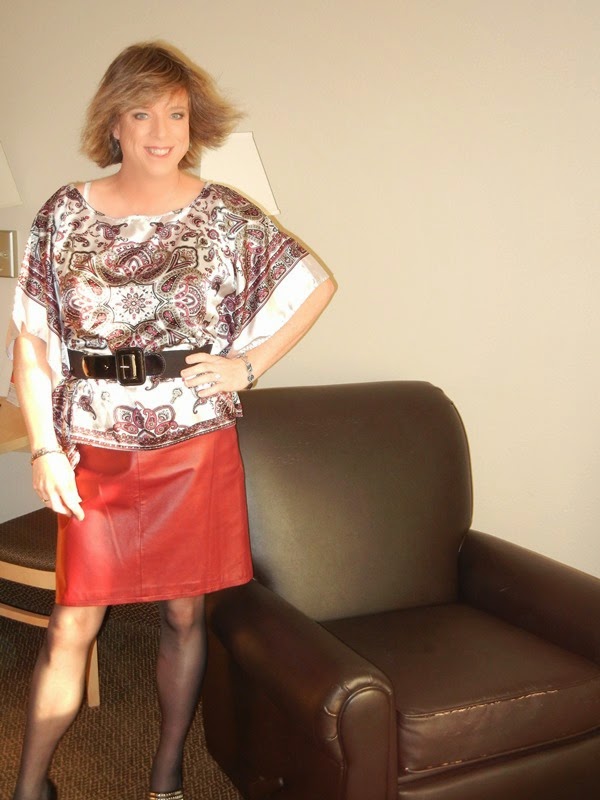 I would have to admit to a little trepidation at the idea of flying out of such a small airport, but I did it anyway. The two or three TSA folks that I talked to were all very friendly and full of smiles, so I guess that it is all good. I’m sitting in the concourse typing this and I haven’t seen any pitch fork wielding crowds yet!

When I arrived in Detroit where I was to catch my connecting flight, I had about two and a half hours to kill, and so I had plenty of time to think. The more that I did think about it, the more that I realized that I wasn’t really feeling the love - I didn’t feel pretty, and so there wasn’t much point to it if I still felt ugly. I made my way to the “Family” bathroom where I washed the makeup off, stuffed my outfit into my backpack, and put my male clothes back on. I then made my way down the concourse to a hamburger shop where I waited a moment for the hostess to offer me a seat.
“How many sir?” the pretty young lady asked me, just loud enough to be heard over all of the noise in the concourse.
“Just one.” I said, raising my left hand and extending my pointing finger in case she couldn’t hear me. Then I turned bright red, because there on my left hand was my elaborate and not at all subtle women’s wedding ring that I had apparently forgotten to take off while I was doing my Clark Kent/Superman act in the bathroom. I quickly lowered my hand and spun the “diamond” around so that was facing inward toward my palm, and then followed her to the table where I removed it and stuffed it into my back pack. Oops . . .