Well, there is a tropical storm that is supposed to hit Austin this morning, so that made me sort of hesitate a bit to travel “pretty”. Getting stranded in an airport with the ticking time bomb of facial hair that is going to grow noticeable sooner or later is not a fun thing to do. Still, it didn't look like the worst of it was supposed to strike until well after my flight was scheduled to leave, so I went ahead and took the plunge.

As I was driving into the airport, I was passed by four different police cars that were all leaving the airport with their lights flashing and their sirens on, and so I had to wonder what the heck that was all about. I never did find out.

On my flight from Austin to DFW, there was an elderly man and woman seated directly in front of me. The gentleman was clearly in bad medical condition and couldn't make it to the back of the plane where his assigned seat was, so the flight attendant told them to just take two seats in the first row of coach. They took the aisle seat for him since they had to just about lift him into the seat, and she took the middle seat next to him. The boarding process was almost complete when a man I would guess to be in his mid 50's shows up with another flight attendant in tow.

"Excuse me, but I think you have this gentleman's seat." She says to the old man.
"Would he mind taking the window seat so that we don't have to move my husband again?" Replied the man’s wife. She had a smile on her face, confident that her request was reasonable and that no one but a pure asshole would decline to sit two seats over from his assigned seat. Well, she was wrong, because after a brief conversation between the man who had been assigned that seat and the flight attendant, she turned back to the couple.
"I'm sorry, but he does mind, and he did pay a premium fee for this seat, so I'm afraid that I am going to have to ask you to move."  The poor flight attendant looked like she wanted to crawl under a rock and hide, but she didn't have much choice in the matter. You could clearly hear several people sitting in the area gasp with surprise as she conveyed the assholes wishes. We were all shocked that this guy would force a frail and sick old man to move. I sat there watching the poor flight attendant and the old mans wife literally pick him up, one on each side, and lift him over and into the next seat. I'm pretty sure that I wasn't the only one glaring at the asshole that had refused to change seats. It turns out that this couple was also going all of the way to Minneapolis, and so we sat in the gate area talking about the jerk while we waited for our connecting flight. 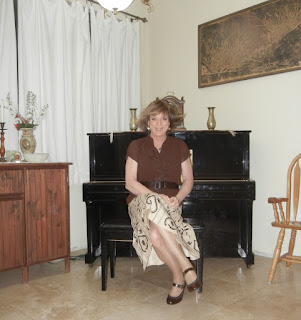 When I arrived in Minneapolis, I made my way to the baggage claim to get my huge suitcase and toolbox. Much to my surprise, a woman stepped out into the walk way directly into my path, forcing me to come to a stop.
“I just had to tell you that I think your outfit is adorable!” she said with a kind and sincere smile.
“Well thank you so much!” I replied, and gave her my best smile. To be honest, I consider this to be a bit of a back handed compliment. Women don’t step out and block each others paths just to complement their outfit. Now if you were standing around waiting in line or something, you might well make such a comment, but to step out and stop a complete stranger walking down a hallway just to complement their outfit is just not something that women do to each other. The unsaid and complete message she was giving was “Gee, you sure look pretty for a man!”  At this point, I know there are going to be half a dozen stories shared in the comments of this blog with people trying to tell me that I am wrong, but save your breath, because I never have and never will get in the habit of deluding myself. In the end it really doesn’t matter much to me, as she gave a kind compliment and gave me smile. Thank you lady, I appreciate that!

I guess that the angle of the baggage claim belt and the orientation of my box was just perfect to allow most of the weight of my tool box to rest on its wheels, because that puppy came rolling loudly down the ramp at flank speed, making a most impressive noise as it rolled over the metal belt material at high velocity. It was making so much racket, and going so fast down the ramp, that the people gathered around the bottom of the belt waiting for their own baggage all backed away in a near panic!
“ZzzzzzzzzzZZZZZZZIIIIIIIIPPPPPPP!  WHAM!”
My fifty pound tool box hit the rubber padding at the bottom of the ramp and then momentarily threatened to flip over the side of the rail before falling back down with another fairly impressive “WHAM!”  I swear I am not exaggerating – at least three people gasped in alarm when it struck. While everyone else was laughing and talking about the rogue tool box, I was turning several shades of red while lifting the topic of their amusement up and off of the belt.
“Yep, there’s nothing like keeping a low profile!” I thought to myself . . .
Posted by Kimberly Huddle at 7:53:00 PM 8 comments:


I've not been making much money for my company, but at least I have been busy and presumably doing something to earn my paycheck! 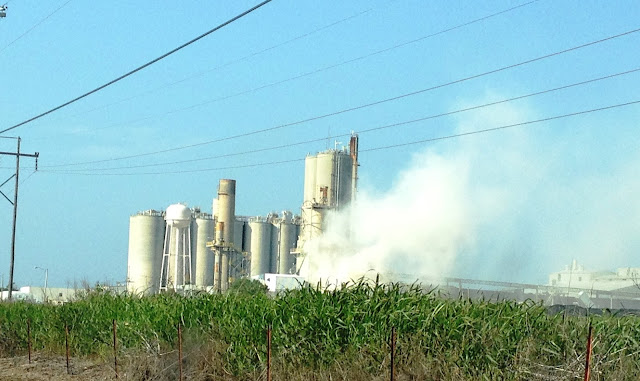 I took a long drive a couple of weeks ago to Pryor Oklahoma to work with a customer at a huge cement plant there, and that drive turned into a bit of a nightmare. On the way up Interstate Highway 35, there was a large sign saying "incident ahead" followed by a sign about half a mile later saying "Freeway closed ahead!" 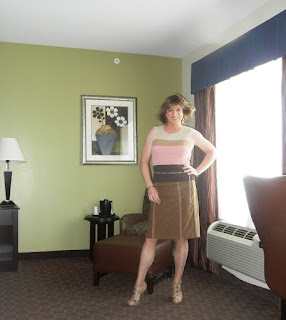 I figured that it must be complete bullshit as this was way out in the middle of nowhere, where there were no exits for miles, and no roads to get to even if you were willing to just make your own exit. There was literally no place to go, so how can they close the freeway?!  Well, I guess that the joke was on me, because they did close the thing, and in both directions too, and it stayed closed for over three hours! There we sat, for three hours; hundreds of cars and trucks with no possible way to get off of the freeway, and with no idea why it was closed. I'd already been driving for almost three hours when I got stranded there, so I've gotta admit that my eyeballs were seriously starting to float. If I hadn't been "dressed", I might have walked off a few yards and done my business in the bushes, but somehow that just didn't seem appropriate when wearing a skirt and heels! I found out later that night that a couple of guys had stolen a police car, and the freeway was closed so that they could investigate the crime scene.

On my drive back home a couple of days later, it wasn’t a whole lot better. I once again found myself at a virtual standstill for an hour and a half because a semi-truck and trailer had caught fire and burned just about all of the way to the pavement. I'd swear that I couldn't even recognize an engine in the burnt remains of the truck  when I finally got along side. Can a fire get hot enough to actually melt an engine?! 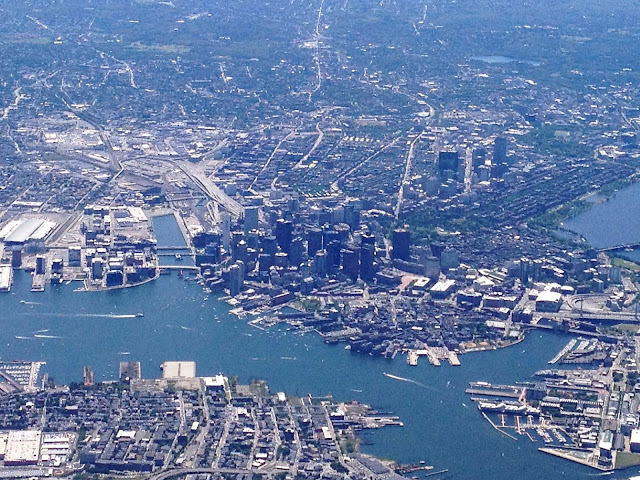 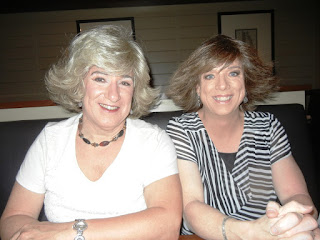 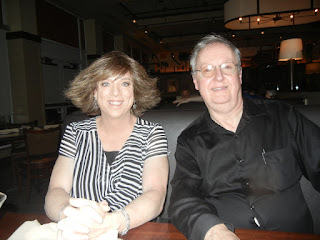 I got home from that trip on Friday night and then had to head right back out Sunday morning for a week in the Boston area. My company is headquartered just north of Boston, and I was there for training. Very little to share with you about that week that you might find interesting, but I did get the chance to go to dinner with Connie and Sally! After dinner, we sat and talked for the better part of four hours I think. I don't recall exactly what we yapped about - it was pretty much just your typical socializing. If you stop to think about that for a second, it's actually kind of remarkable in its own right. When I was a teenager, and even when I was a bit older and in my early twenties, I recall thinking that I would have to commit suicide if anyone ever "caught" me dressed as a woman, and here I am spending a casual night in a restaurant chatting with friends! You've come a long way baby!
Posted by Kimberly Huddle at 6:53:00 PM 2 comments: