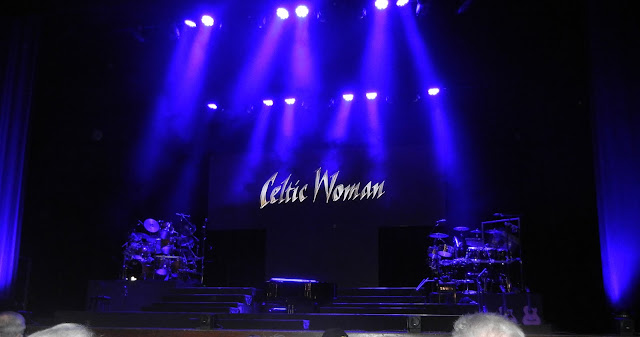 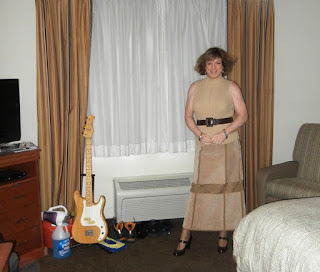 Ok, so the other night I went to see “Celtic Women” live at the Murat Theater in Indianapolis! I’ve always loved them and so this was a really neat thing for me! I really sweated it out over what to wear, but in the end the high winds and relative cool sort of made the decision for me. I was going to wear a medium length kirt that was kind of fluffy, but with the really high winds that we had that night, I would have had my skirt up around my ears. I figured I was gonna be too busy trying to keep my hair from flying away to be properly dealing with my skirt, and so I chose a long sued skirt that the wind couldn’t mess with. All in all, I was reasonably happy with the look, though not exactly giddy.

The show was every bit as awesome as I’d hoped, with the young women being not only incredible singers, but of course also exceptionally beautiful. The beautiful blond woman that dances and leaps around the stage, all while playing violin beautifully, was absolutely heart stopping. She has piercing blue eyes that just reach out and grab you, and when you add that to her grace and talent, she is possibly one the most beautiful women I’ve ever seen. She is a teeny little thing too, barely coming up to even the shoulders of the other women. I’d be surprised if she was even five feet tall – it was like watching Tinker Bell flit around the stage!
Of course lots of  performers have created beautiful renditions of “Amazing Grace” through the years, but the one that they offered was just incredible.  It started with two bag pipes and ended with the full blown band and a choir, and it was so beautiful that it sent chills up and down your spine.
Of course lots of women were very well dressed, so I didn’t stand out for my attire. Maybe for my height, size, and bulk, but not for my outfit. The woman that sat next to me on my right side had brought her elderly mother with her, and for some reason mom was not happy with the seats. We were only four rows back from the stage, possibly the best seats in the house, but mom was not happy.  The woman kept leaning over and speaking softly to me about her unhappy mother.
“She doesn’t like the seats! I have no idea what is wrong with her!”
So as the concert is starting, with the beautiful violinist I mentioned above taking to the stage, the woman next to me leans over and says “Wow! That girl has some arms on her huh?!”
Looking down at my own masculine arms and chest, I almost choked . . .
Posted by Kimberly Huddle at 10:11:00 AM 5 comments:


It’s been a while huh? Sorry ‘bout that, but I’ve been a tad bit busy with my personal and professional life being a bit tossed about.
We have a service contract with a huge customer in Indiana that requires us to have an engineer onsite every week day. This was all well and fine until the guy that was filling that position for us decided to up and quit. Guess who the only other person in our field service group is that knows that product well enough to go in and pick up the pieces? Yup, ‘twas I! So, for the last six months I’ve been living in a hotel in Indiana.
It turns out that it is a good thing that the guy quit, because he apparently wasn’t devoting much effort to his job, and the customer was pissed off about it. Here our customer was mad as hell, but we had had no idea until this guy quit. Want to hear something funny? This guy turned around and started his own company, then tried to take the service business away from my company. Apparently he didn’t realize just how badly he had pissed off our customer and he had thought he could make his own personal fortune by coming right back in as his own contractor.  One of the managers I work with here flat out told me that if he saw that guy on the facility, he would personally escort him off of the premises.  Yeah, needless to say, he didn’t take the contract from us.

Despite the fact that they're in a historically masculine industry where you would expect Good Ol' Boys and Red Necks to be in charge of things, this company is VERY accepting. I've met several openly gay people who are happily married here and are clearly accepted, and I've met three TG's that I know of who are open and out here. In fact, this company will actually pay for their GRS, and I don't know of any other company that will do that. Don't get me wrong, no one is running up to hug them all and say "You are SO welcome here!", but they do have good jobs, and are accepted. It is progress. I'd like to share their company's name because I am proud of them and they should be proud of themselves, but I can't risk breaking either their company's policies on social media, nor my own company's. Not worth the risk to me.

The good news is that my company is well aware of the sacrifice my family and I are making. I received a letter and a modest bonus from the Vice President of our company thanking me for going to extraordinary lengths to salvage the situation. The bad news is that I’m not sure their thanks and bonus is worth missing so much of my children’s growing. . . 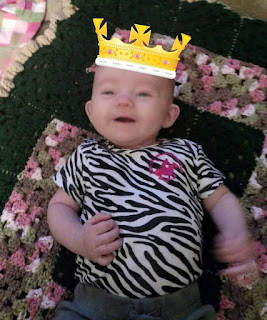 Welp, I have a brand new granddaughter, Gwenevere, and she is just a few months old now! Of course you would expect me to say this, but she is one of the cutest critters I’ve ever seen. Funny, but as a kid, I always hoped that someday I would find someone stupid enough to marry me, but somehow the idea of having children never crossed my mind. It really floors me that I have three children and two grandchildren now. How the hell did that happen?!
Where I am staying in Indiana is about half the distance to visit my son and his family in Virginia as it would be from my home in Texas, so I made it a point to go meet my new granddaughter one weekend. It might be a shorter drive from here than it would be from Texas, but it still wasn’t a short drive. It took me 12 hours of driving each way over one weekend to git ‘er done, but I did it! Just to make it that much harder, I even made the trip back to Indiana with a massive hangover, because I’m just that kind of stupid.

I don’t get out much as Kim these days for a few reasons. I’m afraid that my three years of laser treatments on my face failed to kill my beard. It helped a lot, but it’s still there. Since it has been a couple of years since my last treatment, you can now see beard shadow through my foundation, and so it is pretty quickly obvious that I am a guy in a dress. Strike one against my confidence. Just to make things worse, my 50 year old face is rapidly degrading and showing its age more and more each and every day. It surprising to me just how rapidly the wrinkles and the sagging eyes are getting worse. It’s as if my face held out as long as it could, but has now thrown in the towel and said “Screw it! Let that shit wrinkle and sag!”. So at a time when I have to wear heavier foundation to hide the beard, I now have deep wrinkles that are exaggerated by the heavy makeup. Strike two for my confidence. Last but not least, working at this customer site is a major change of physical activity for me. I am used to lots of walking through airports, busting my butt off to do a job, then lots more walking through airports on the way home. My job with this customer? Sit at a tiny cubicle all day long just in case one of their 160 instruments fails. I’ve gained over 10 pounds since being tied down to one customer. Strike three for my confidence.  Let me sum that up for you – fat, old, bearded dude in a dress. Sigh . . . 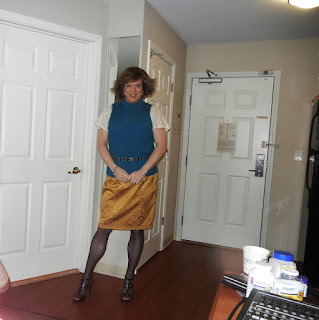 So I’ve been in Indiana for about six months now and this last weekend is the first time that I got out as Kim, and my confidence was destroyed right out of the gate. I’d decided to go see the latest installment in the “Divergent” series (a mediocre movie by the way) and was standing in line to buy my ticket. There was a mother with two teenage boys in line in front of me. I’d guess one of the buys was probably about 16 and the other 14.  The 16 year old looked at me as he turned around to talk to his brother, and then the whispering started. The 14 year old starts looking up, down, and all around as if he were watching a bee buzzing about his head, before he turns fully around to look at me with a huge grin on his face. That was hands down the worst job of looking while trying not to be obvious that I have ever seen. It was so pathetic that it actually made me laugh a bit, so I thought I’d make the best out of it.
“You know, you really need to work on your subtlety a little bit.” I told the kid with a smile. He looked a bit stunned, but his mother and big brother broke out into a full laugh.

So I guess here is the way things are panning out. I’ve traveled all over the country as Kim for the last 10 years or so. Perhaps I was deluding myself, perhaps not, but during most of that travel, I have felt as if I were perceived as a woman.  This was gratifying and fulfilling for me. Now, for the reasons that I mentioned above, I am clearly not being perceived as female, not even by myself, and this I do not find fulfilling. Now when I go out, I am clearly being perceived simply as a cross dressed man, and this takes quite a bit more courage and a thicker skin. I’m not sure I have it, and even if I do have the courage, what is the point if it doesn’t make me happy? I’m still contemplating things, but I think that the odds are good that I’m just about done with it. I told my daughter the other day that I was thinking about just being a “normal” guy, and she laughed and informed me that “normal” doesn’t impress her much. Damn I love my kids . . .
Posted by Kimberly Huddle at 11:50:00 AM 23 comments: