You know there is just no way around it; while born male, I clearly am not and have never been typical. Being raised by a single handicapped mother, I never learned many of the things that most of your average boys learn.
I never got into sports, and at the age of (almost) 53, I still can’t throw or catch a football to save my life.

I think I went fishing twice, once with my alcoholic father. We spent the day floating on a lake with him drinking beer after beer. I don’t recall if he caught anything or not, I just remember being horrified when he told me that I either had to pee over the side of the boat, or pee into one of his beer cans and then pour it over the side. Most little boys would have been golden (pun intended) with just peeing off the side of the boat, but as I said, I wasn’t your typical boy.
“Rough housing?” Not so much. Never had a father or father-like individual around that wanted to rough house, toss each other around, etc. The closest I had to this was my big brother, but most of the time that we tussled with each other, it really wasn’t in fun; it was brothers giving each other shit. I’d give him hell with my mouth and my words, and he would reply by knocking me on my ass.
I never went camping as child but the US Army made damned sure that I experienced that particular past time to the fullest. When I was stationed in Germany, my unit would watch the weather report, and when the weather was going to be cold, wet, and absofrickenlutely miserable, we would pack all of our gear up and go live in the woods for a few weeks. I grew to absolutely hate these field events, and 30+ years later I still flat refuse to go camping. Some days I’d swear that my toes are still cold from my last field exercise.  I actually do enjoy time in the wilderness and am happy to spend the day out in the dirt, dust, and bugs, but by God when it comes time to call it a night, I want a shower and a clean bed to sleep in. If you really wanna make my A-list, throw an air conditioner into the mix. I aint sleeping in the dirt anymore. No. Nope. Done with it.

So fast forward lots and lots and lots of years and here I am, the father of three beautiful children. I’ve had zero role models for being a good father and pretty much my main plan for dealing with fatherhood is to try not to suck at it as bad as mine did. So no real plan to excel at it, just the desire to not totally screw it up.

Recently my wife has become almost obsessed with a fitness class based on self-defense that is given in a neighboring town and she goes pretty much every night. I’m delighted for her as she is clearly profiting from it, both physically and mentally. She was so impressed with the way that this class made her feel so much better about herself that she enrolled our 8 year old son in a similar class in the same building, where he is just beginning to learn the very basics of martial arts. I absolutely love the way it is changing his attitude! It is giving him confidence and teaching him both respect and some self-discipline. It also has the advantage of getting him off of the couch, out from in front of the TV, and gets him doing something physical.  A few weekends ago, we watched him test for his next belt, and it was a serious pleasure to see the smile in his eyes, and just to watch him be a little boy. At one point I looked at my wife and told her that I thought this was one of the best ideas that she has ever had.
“I know!” she replied
“I think hanging out with Anthony (the instructor) is good for him. It gives him the chance to hang out with guys that  . . .” and here she paused and got that look on her face that after 30 years I’ve come to recognize as her looking for a way to say something without hurting anyone’s feelings.
“Guys that act like guys?” I finished for her with a laugh.
“Well, yeah. Sort of.” She agreed with me.
There was nothing mean or ugly meant here, and she certainly wasn’t trying to hurt my feelings. It was just a simple statement about the way that things are. Still, it left me more than a little depressed and I probably spent the next two weeks obsessed with the thought that I’m not doing right by my son. Not sucking as bad as my father did is not good enough. Sigh . . .

I’m off to see two customers and my big sister this week. A small perk of my job is that on rare occasions it takes me to where it is feasible for me to see family and friends that live thousands of miles from me. In this case, I’m off to the University of California at Berkeley, which just happens to be only a two hour drive away from my big sister. I’ve scheduled the flights so that I will get to spend Saturday with my sister, and then head straight from there to Indiana for my next customer Sunday morning. My sister and her husband will be taking two of their grandchildren to baseball games that they will be playing in. You know, one of those things that most fathers probably do with their sons? Maybe I’ll learn something from the experience – who knows? 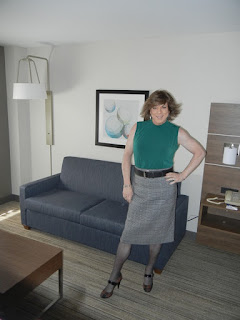 Due to my ongoing medical problems and my sedentary life style, I’ve gained some weight in the last year or so, and so finally have had to start buying some new clothes that will actually fit. I bought this skirt, fully intending to wear it under my top, but much to my surprise and delight, I thought it looked better to wear the blouse tucked in, with the skirt over it as it was intended to be worn. Tucking a blouse in is something I’m pretty sure I’ve never done before due to a serious lack of a proper figure for pulling it off.  If I’m wrong and it looks terrible, do me a favor and keep that to yourself, because for the first time in a long time, I actually felt pretty. 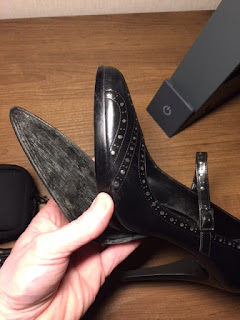 So as I’m getting out of my truck at the airport parking facility, I could feel that there was something stuck to the bottom of my shoe. Mind you, it’s dark and I’m dragging two large bags to the shuttle bus so I can’t give it proper attention at first, but ultimately I had to as it was so large it was making it hard to walk. I stopped to pull the offending item off of my shoe just to discover that the offending item was in fact the sole of the shoe itself. Apparently the glue had given out and the sole had peeled back, and it was now being dragged along under the heel itself with each step. “Drag, clop, drag, clop, drag, clop” it went as I made my way onto the shuttle bus dragging my tool box and suitcase behind me.
I wasn’t feeling quite so pretty anymore.  .  .
Anyway, I made my way off of the bus, found a quiet place to sit down, and pulled another pair of heels out of my suitcase. Being a multi-color plaid-like pattern, they don’t really go with the outfit, but that’s pretty irrelevant at this point as I can at least walk in them.

Having my shoe dilemma resolved, I then made my way through the TSA inspection point where I received a mixed blessing. The inspector looks at my ID for a moment, then he looks at me in confusion.
“Matthew?” he asks relatively loudly, “I’m sorry – where is Matthew?”
I looked at him for a moment, trying to figure out if he was messing with me or if he was serious, but I was absolutely certain that he was sincere. I was just about to explain exactly who ‘Matthew’ was when it apparently clicked for him.
“Oh!” he said quietly, then initialed my ticket and handed it and my ID back to me.  I smiled at him as I took my documents back, then raised my finger to my lips.
“Shhh!” I told him softly, winking at him as I walked by.

When I got into my rental car, I connected my phone to the cars Bluetooth, and was soon listening to Vikki Carr as I was making my way to the exit. For just the briefest of seconds, I found myself thinking “Hey, I’ve got to call mom and tell her about the new Vikki Carr albums I found!” The thing is, my mom died years ago, but I still catch myself thinking things like this from time to time.