Well everyone, I spoke to my wife some more about this tonight. She is honestly not upset, and trust me, if she was upset she WOULD let me know!The funny thing is that she said much the same thing that many of you have said here "Screw 'em if they have a problem!"

As my only pain was thinking that I had hurt my wife (however indirectly) I'm OK now. If she's not hurt, then I'm not. I honestly couldn't care less what these people think or know as long as they don't hurt my wife because of it.

I thank you all for your genuine concern. If y'all are "That kind of people" then I'm OK with that and proud to be a part of it.

Hugs from Texas!
Posted by Kimberly Huddle at 9:55:00 PM No comments:

As I recently posted, we found out Thanksgiving day that my Mother in law apparently knows about me and has been kind enough to share that with at least some of my wife's family. (Thanks Mom, love ya'! Really! Mean it!)
Well today it got even better. . .

My wife works at the same company I do so when I'm in town, we drive to work and back together. Today she let me know that one of the other ladies at our office was asked not to invite my wife and I to her "couples" baby shower. And I quote "I don't wont those kind of people around".

For this to make sense, you have to know that a woman who I now fondly think of as "Witch" used to work for my company, found out about me, and was completely repelled by it. Witch told the same woman who shared the "I don't wont those kind of people around" comment with us more than a year ago. It now appears that she told more people.

So way cool! My wife loves me for 20 years and gives me two wonderful children. I repay her by repelling her family and ruining any chance she has to make normal friends at work. . .

When we were speaking about it at dinner tonight, and it was all I could do to keep from crying, she told me "I know it makes you happy and I wont ask you to stop, but it hasn't been good for me."
Wow, I feel pretty much like the lowest thing on the planet right now.
Posted by Kimberly Huddle at 9:54:00 PM 2 comments:

Many years I ago I had a very intense and realistic dream. It was a very simple dream, and I'd be surprised if anyone who is NOT transgender would understand why I found it to be so powerful and emotional.
I was a woman, in front of a mirror, brushing my hair. I was not a beauty queen in this dream, nor a princess, a "hotty", or a sex goddess. I was just a woman, brushing my hair. Told you it was simple.

For all of its apparent simplicity, it was one of those dreams that seems so real, feels so real, that it takes a moment upon waking to realize that it was . . . just . . . . a dream. When I did wake up enough to know it was just a dream, and that I most certainly was not a woman doing this most mundane thing, I felt tears running down my face.
This dream was the inspiration for this drawing. 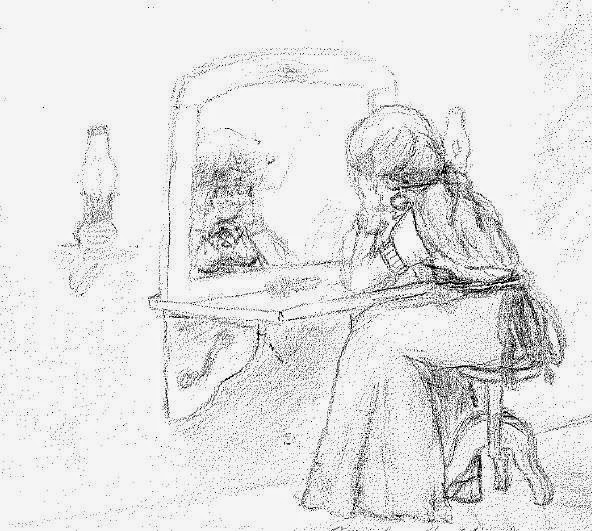 Thanksgiving night we went to San Antonio to spend the holiday with my wife's aunt and uncle. These are good folks that have retired from the army and settled down about three hours south of us here in Texas. As it always does at some point or other, the conversation eventually came around to my wife's mother. She went through a divorce about a decade ago and it really tore up her life so she moved in with us for a while. It ended somewhat badly and more or less my wife asked her to leave. So anyway, while we were talking about my mother in law, my wife's Aunt sort of let a comment slip out.
"I don't believe a thing she says about you," said my wife's aunt.
Hmm . . . I'm a bit over 40 and these days I don't rattle easily, so I smiled and calmly asked her what my mother in law had told her about me.
"I'm not gonna say. Besides your too much a man for that and I don't believe a word of it."
I tried a little bit more but for some time she refused to elaborate, but at least two more times she referred to this, so it was clear she was either very concerned about it or fishing.
I waited until we had a moment with the children out of the room and then I pushed her for more info and at last she came out with it.
"She said you were a cross dresser. I don't believe it. Besides, who cares what you and your wife do in your own bedroom?"
I glanced at my wife, looking for some indication of how she would feel if I were to launch into a discussion about it, and I found her very slightly shaking her head "no". After 20 years of marriage, this glance back and forth was an entire conversation. I had asked my wife if it was all right for me to talk to them about it and my wife had asked me not to.
She never actually asked if I was or not, and given my wife's discomfort, I neither confirmed or denied it. My own warped sense of pride, integrity, and honor would not allow me to lie about it. Had she point blank asked me, I would have told her the truth.
Her aunts words "I don't care what you two do in your room" sort of bugs me. Now they have this vision of me like the rocky horror picture show, some guy in 9 inch heels and fishnets prancing around a room. It gives me the creeps that this is probably what they think a cross dresser is, what I am. I want to talk to them, tell them what it really is, what it really means to me, but my wife has asked me not to speak to them about it or explain it. I hate it but I will honor her wishes. When you have a wife that accepts this of you, you have to respect her wishes sometimes and put her comfort level above your own.
If you have read my story from one of my first blogs, you know cross dressing is so much more for me than the something "you two do in the bedroom" and I just hate it that this is the picture they are left with.
On the way home we talked about it and I agreed I would not discuss it unless I was specifically asked.
We had not even been aware my mother in law knew of this. We knew she couldn't possibly keep a secret like this and so we did not share it with her, nor had I gone out the entire year she lived with us, so I know she has not seen me. My best guess is she was snooping through our room and closet when we were out to work and she is putting two and two together.
Knowing that she has been telling people this has allowed another little piece of the puzzle to fall into place. A week ago my sister in law brought her two children over and stayed the night with us. At least half a dozen times she referred to me as "she" or "her". I had wondered if she had figured it out then. Knowing that her mother shared this with my wife's Aunt and Uncle, I think it's certain she has shared it with my wife's sister, and probably her entire family. I don't know if this has yet occured to my wife. My sister in law and her husband live in another small town in Texas. While very good people in my opinion, they are NOT the type to accept this sort of thing well. These are the type of folks that say "go get a rope" if they were to see a cross dresser.
The only feeling I have about all of this is sorrow for my poor wife. I am not ashamed of what I am and it doesn't bother me much if someone knows, but my wife has lost a good friend when the womans husband found out about me, and now my wife's entire family almost certainly knows. Once again I have managed to hurt my wife, the lovely little girl that saved my life 20 years ago when she had the courage to say "I love you too". Once again, I've brought pain to the lovely woman that has given me two beautiful children, and two decades of love.
Most of the time I'm OK with it, but sometimes being TG really sucks . . .
Posted by Kimberly Huddle at 9:52:00 PM No comments: