So this time I was off to Indianapolis. I used to go there about once a month to support our products at a huge customer of ours about an hour south of Indy, but we eventually hired a full time engineer to work there, and so I lost my monthly trips. This annoyed me quite a bit at the time because I had grown to kind of know the Indy area and had made several friends there.  The bad news is that there would not be any personal time while I was there, because if I had free time, I would have to spend it with the  colleague that I just mentioned. I am not the most socially adept person in the world, but even I knew that it would be considered awful rude to be so close and to not invite him to a lunch or dinner.
“Hey dude, I was right down the street from you for the first time in years but I didn’t think that you were worth spending time with” sort of sends the wrong message.

I think that I’ve mentioned this a few times already, but the US Airways folks in Austin have decided to warm up to me a bit. They used to be pretty cold and impersonal with me. I’m not sure if that was just the way that they treated everyone, or if that was the way that they treated me for being TG, but I sort of had the impression that they were not terribly friendly with any of their customers.  Anyway, I’ve noticed that for the last six months or so that they have changed, and more often than not these days, they greet me with a smile and go out of their way to chat with me a little.
This time one of their male customer service reps waved me up to his counter and asked me where I was going and how many bags I was checking.
“I’m going to Indianapolis and I am checking two bags. Two heavy bags that you’re gonna hate me for!” I told him with a laugh. He gave me a smile and started checking me in when one of the female agents that often check me in walked behind him and stopped him.
“No hun, she is checking in two bags, not one!” she told him
“You know she said two, I even heard two, but still I checked only one. I am so sorry – give me a sec.” he acknowledge to both of us with a laugh.
“No worries!” I assured him. “She checks me in so often that she has come to know exactly how I travel.”
“Only about once a week for a few years now huh?” she agreed with me, and we went on to chat for a few more minutes about nothing in particular. It just kind of struck me that they were now treating me with the same kind of friendly service that Delta airlines had always extended to me. Nothing Earth shattering, and no one ran around the counter to hug me or anything, but they treated as more than just someone that had to be dealt with.

The flight attendant on the flight from Austin to Charlotte (where I was to catch a connecting flight) was a real sweetheart. I was sitting in the very first row, and so as the plane was taking off, she and I were seated facing each other. I caught her doing the very typical female thing of looking over my outfit. She was staring at my shoes for a moment, and then looked up to notice that I was looking at her. Her face broke out into a huge grin.
“Those shoes are adorable!” she said, loud enough to be heard over the engines.
“Thank you! They are just about perfect for this dress too, huh? It’s almost like they were made to go together!” I replied.
“Yep. Very cute!” she agreed. 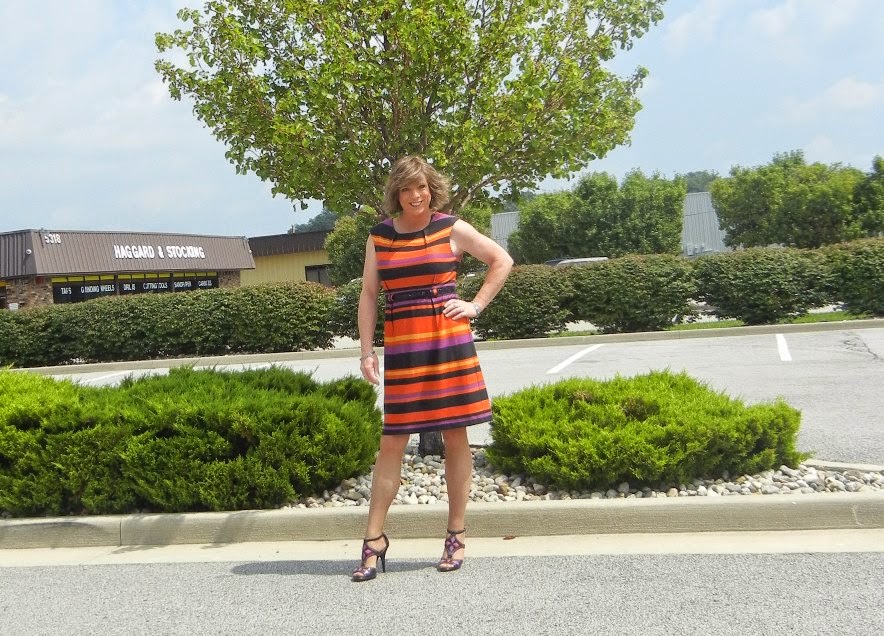 We had just finished this deeply philosophical conversation when there was a loud “BOOM!” from directly in front of me.  Now I am a seasoned air traveler, but I don’t care how much experience you have on airplanes, when you hear a loud crashing sound on takeoff, your heart will go directly into your throat, and I guess I must have physically jumped just a bit, because she laughed and pointed at the bathroom door.
“I’m so sorry – I should have warned you that the door sometimes slams open on takeoff.”
“That’s OK. You would think that I’d be expecting that sort of thing by now.” I just about gasped back at her, while my heart was still trying to beat its way outta my chest.
Once the plane had landed and the airplane was making its way to our assigned gate, the same flight attendant got on to the PA system.
“Ladies and gentlemen, our gate does not have a jet bridge, and so we will be deplaning in what I like to call ‘Presidential style” – using the rolling stairs. They are kind of steep, and so please be careful,  use caution, and make sure that you use the hand rail.”
Her deplaning  ‘presidential style’ comment brought back a few childhood memories, and before I had time to think about it, I blurted it out.
“I just hope that I won’t be deplaning president Ford style!” Much to my surprise, most of the first class section laughed at this. If you are old enough to remember President Ford, he was all but notorious for tripping and stumbling on the stairs of Air Force One on multiple occasions. And yeah, if I have to explain the joke to you, it aint funny anymore. . .

On my flight from Charlotte to Indianapolis, the man seated next to me was kind of an enigma. I couldn’t decide for a while if he was a nice guy or a bit of an asshole, but in the end he turned out to be a little of both.  We exchanged the usual pleasantries as we took our seats and then sat quietly as people boarded the plane and filled the aisle. Suddenly there was a big commotion about halfway down the aircraft that turned out to be a fairly large woman shoving her way back up the isle that everyone else was trying to get down.  In short order, she had pushed and shoved her way back up to our seats and we could see that she was brandishing a baby bottle with dry formula in it in front of her as if it was a sword or a scythe.
“Look, I’m sorry, but I HAVE to get water for my babies bottle!” she all but yelled over and over as she literally shoved people out of her way. Considering that this was the busiest part of the boarding process and the aisle was full, this was no small feat on her part and so I was shaking my head in wonder as she plowed her way past us. The man seated next to me was watching the show as well and turned to me with a laugh.
“You know, you would think that she would have thought of that before she boarded the plane wouldn’t you? I mean it’s not like she suddenly had the baby just this very moment in the back of the plane is it?”
“You got me!” I replied, not sure if I really thought it was funny or not. I’ve traveled once or twice with my children, and there aint a damn thing about it that is easy, or that is not exhausting, so I did sort of feel sorry for the woman.  On the other hand, she had been remarkably rude, and let’s face it, she, and everyone else, would have been much better off if she had just taken her seat and waited five minutes for things to calm down before calling a flight attendant to ask for some water.  Tired people often do not think straight, and let’s face it, no one is as tired as a mother traveling with an infant, so I was inclined to cut her some slack.
A few minutes later, a lady across the aisle from us broke out a great looking sandwich and was just about to dig in when my seatmate stopped her.
“Hey, hold on now! You can’t eat that unless you brought enough for everyone!”  Everyone busted out laughing, and to her credit, she offered to give him some but he laughingly declined. He and I traded a few more words once we took flight, but it was kind of noisy and so it was difficult to hold a conversation without speaking very loudly. Given that the louder I get, the more obvious my male voice is, I really wasn’t inclined to do much talking.
At one point in the flight, both of our drinks were empty and our flight attendants seemed to be having a long chat session in the front of the plane, so he got up and went to them for a refill. When he came back, he asked me if I wanted another drink, and offered to go get it for me. I told him I was kind of on the fence since I didn’t think that we had too long before the flight landed, but he took this as encouragement, and before I knew it, he had gone back to the front of the plane and returned with a screw driver for me. I thanked him, and then told him that I thought he made a fine flight attendant, much to his great amusement.
The more that I thought about it though, the more significant that I thought this interaction was. He was clearly going out of his way to converse with me, and it was really only my own lack of confidence and my own reluctance to out myself with my voice that stood in the way of having a conversation with him. When the flight attendants weren’t terribly concerned about doing their job, he had gone out of his way to try and do something nice for me, even though I certainly hadn’t asked him to. He had wanted to do something thoughtful for me, and that really kind of impressed me. I am probably making more out of it than I should. . .
Oh, just to top the trip off with a complete lack of style and class, when it came time to leave the plane, I stood up and grabbed my 35 pound backpack out of the overhead. It’s been a while since I’ve worn heels, and so I went just a bit off balance as I slung the heavy bag onto my shoulder. Yeah, I more or less stumbled my way up the aisle. In the hour and a half flight, I’d only had two drinks, so I knew it wasn’t the alcohol, but I also knew how it must have looked, so I was bright red as I passed by the flight attendant and she grinned from ear to ear.
“You all right hun?”
“More or less . . .” I replied as I made my way off of the airplane, hiding my face behind my upraised hand.