Apparently I am Determined to show my ass end 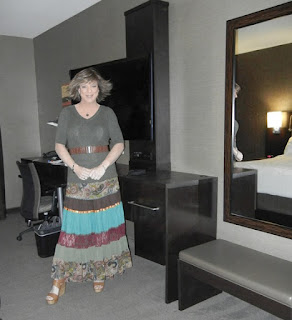 So, in last weeks blog, I mentioned wearing a skirt that was a bit too large for me, and how the darn thing tried to slide off of my rear end while I was juggling my luggage at the rental car shuttle bus. Yeah, apparently I am determined to show my ass to people. Read on . . .

I recently rejoined the Delta Skyclub; it’s kind of a country club found in most larger airports that Delta Airlines serves. It is a prohibitively expensive club to join, presumably to keep it exclusive and keep the riff raff like you and me out of it. The thing is, Delta lets you pay for it with your miles, and since I have a Delta credit card that I use to pay for all of my travel expenses, and I travel a LOT, I had plenty of miles to buy a membership.

Anyway, after all of the coffee that I drank in there that morning, I had to use the bathroom and apparently I didn’t get my wardrobe back together entirely correctly when I was done. Not realizing this, I made my way from the club to my gate, where I stood in the boarding area for a moment before a woman in her 60’s walked up behind me.
“Excuse me.” She said softly. I assumed that she just wanted to get by me and so I smiled and took a single step to the side. Not to be put off, she followed me and repeated herself
“Excuse me?”
“Oh! I’m sorry! I thought you just wanted by me.” I told her with a laugh.
“No, I just wanted to tell you that you should tug that back of your skirt down – its caught up.”
Mortified, I frantically started feeling behind me, and sure enough, part of my skirt was caught up and pulled considerably higher than is decent. I turned about three shades of red and started tugging the damn thing down where it belonged.
“Oh my God, I wonder how long I’ve been making a complete ass out of myself? Thank you!” I blurted out to the woman.
“I don’t know, but you’re welcome.” She replied with a kind smile.
So there I stood for about five minutes, feeling small and just a bit humbled. Ok, maybe a LOT humbled.

Eventually it came time to board the aircraft, and this kind woman was in a boarding group ahead of mine. As she stepped past me, I again expressed my deepest thanks to her, and she just gave me a smile and a nod. About 30 seconds later, she stepped out of her place in the line to come back to me.
“Don’t worry, you weren’t showing anything you shouldn’t have!” she said with a sparkle in her eye.
Good to know . . .