Where to start?
You might (or might not) recall that I have this wonderful condition called Erythema Nodosom that causes large and very painful bumps on my legs. I had started to hope that the condition had gone away because for the first time in twenty years, I had gone over two years without an outbreak.  Yeah, well, so much for that hope, because they came back about a year ago with probably the worst outbreak that I have ever had. I don't want to dwell on that, and I'm not looking for sympathy, just explaining why I've not been writing my blog for quite a while. Nothing like being in constant pain and having huge lumps all over your leg to make you lose any desire for trying to be anything less than as comfortable as possible.
I think there is also the fact that I've become so accustomed to traveling as a woman that it's no longer quite so fascinating for me. Much like your average woman, I've reached the point where I often decide that wearing a skirt and heels while traveling just makes things too much harder than they need to be. Try slinging two 50 pound bags on and off of shuttle buses while wearing a 30 pound back pack and wearing a skirt and heels and you will probably come to the same conclusion pretty quickly.

As I mentioned in my last blog, my wife has taken a job. I'm not sure if that is a good thing or a bad one for our family, but I think that she is much happier now than she was, so it's all good. She had been spending all of her days surfing the internet and looking for things to get pissed off about, so I’m pretty happy that she now has something else to occupy her mind. It’s also forced our children to take a little more responsibility for themselves, not to mention forcing us to give them more responsibility. I think this is a good thing?

It sometimes seems like the Huddle home is under some curse by the universe to always be in some state of construction. I can't remember the last time our house didn't have some area that wasn't under renovation or rebuild and I've gotta be honest, I'm kind of tired of it.  Among the dumber things we have ever done was to sell the 150 year old house that we used to have and purchase a relatively modern 25 year old house. The antique home we sold 15 years ago was built so well that it will still be standing long after this modern garbage is bulldozed to the ground. The way things are going, a bulldozer won't be required because this place will fall down all on its own. The kitchen is now completely rebuilt, and the dinning room is about 95% done. The upstairs bathroom that we had to gut in order to rebuild the water rotted wall a few years ago is still unfinished. Just a plywood floor with no shower or tub on it. Sigh. . .

I took a trip to Houston for work the other day and scared the hell outta myself. There I am in Houston rush hour traffic when I started to get kind of dizzy. "Dizzy" is maybe too strong a word for it, as the world wasn’t spinning or anything like that, but it was kind of like driving with a few drinks too many in me. Not that I’ve ever done that mind you. *cough*  Anyway, when I realized that I was covered in sweat, scared to death, and gripping the steering wheel so hard that my hands ached, I made my way to the side of the freeway and sat there for ten minutes or so. When my heart stopped racing, I got back on the road and made my way to my customer to get the job done. The dizzy feeling receded but didn’t actually go away for several weeks. I hate going to the doctor, but this scared me bad enough to do it. Yeah, they ran lots of tests, EKG, all that stuff, told me that there were "markers" that I have had some mild "heart event" in the past, but that there didn't appear to be anything wrong with me. I made an appointment to see a cardiologist for a heart stress test, but after waiting a week for it, they called me two hours before the appointment to cancel it because the doctor had "something come up" at the hospital. The only dates they had available for a new appointment were dates I was already scheduled to be out of the state on service calls, so the heart stress test has died a quiet death. Since then, the dizzy feeling has largely gone away, so I am going to leave that one alone. Sigh . . . 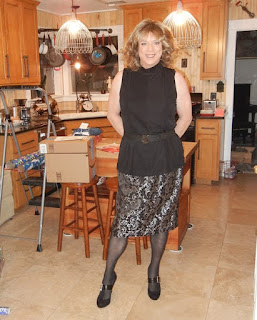 Swollen leg or not, I decided that it was time to take a trip before I lose all of my confidence, and so I headed to Arizona in an outfit that I bought recently.

I loved the cut and fabric of this skirt the moment that I saw it, but I had a moment of confusion and concern when I saw that they had placed the slit in the front center of the skirt, instead of in the back as most are. I sat there looking at it on the hanger for about five minutes, trying to decide if that was a show stopper for me or not, but ultimately decided to go for it since I really liked the fabric and since it was significantly discounted.  When I finally got the chance to put it on, I confirmed my worst fears - it looked like I was an idiot with my skirt on backwards!

I stood there contemplating the dilemma for a moment:
-I already look like a dude in a dress.
-The argument could be made that I am too old for a pencil skirt.
-I am already drawing attention for being tall
Did I really want to add to that list that I looked like an idiot with her skirt on backwards?
No, not really, so I grabbed the waist band and spun that puppy around so that the slit was in the back where the damn thing belonged and was delighted to see that it looked just fine! So now it doesn’t look like it is on backwards, but it really is. In some ways, this could almost be a metaphor for my life, come to think on it.
You prolly also notice that I'm wearing new hair! The jury is still out as far as I am concerned.  I think it's cute but can't decide if it is really appropriate for me or not.

It had been so long since I'd played with makeup that I got up at 2:45 AM to give myself a little extra time to get ready. The irony is that I apparently haven't lost my makeup skills as a result of neglect, and I was actually done faster than usual and so was ready to go by about 4:30. There was no need to leave for the airport quite that early though, and since my neighbor leaves for work consistently at 5 AM every day, I figured I better just sit tight until after he left for work.  As soon as his taillights disappeared down the street, I dragged my suitcase out to the truck and hefted it into the back seat, then I climbed into the cab . . .  to the accompanying sound of the seam in the back of my brand new skirt ripping some of its threads out.  Okay, so maybe I should have worn it with the slit in the front after all. . . 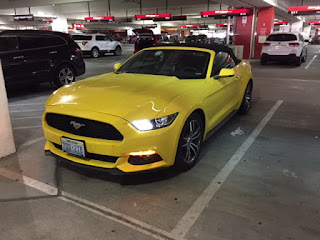 Once I landed in Phoenix, I made my way to the rental car facility where I found a bright yellow convertible Mustang waiting for me. I took one look at it, then at my large bags, and turned to go back to the counter and ask for a car that was a bit more practical for me. I made it about two steps before my legs locked up - I just couldn't do it. That car was just too pretty, and I'd never actually driven a convertible before. I turned around and fought, kicked, and screamed until I got both bags into the damn thing and then headed for the exit with a grin on my face.

I didn't feel particularly passable or not passable for most of the day; just kind of hum drum. I got a lot of "I know what you are" grins in the airport and in the plane, but that's a pretty typical day. So it was with this mindset that I handed my driver’s license to the female Avis employee at the exit. I  have a Texas ID with my pic on it, but the rental car companies are one of the few places where I can't use the state ID and still have to hand out my male drivers license.
"And where is Matthew then?" She asked me after looking at my license.
"Yeah, that would be me." I replied, trying to smile, but being as tired I was from such an early day, I'm not sure if it came out as a smile or as a grimace.
"Oh, I see!" She replied quite calmly, and then took another and longer look at my license.
“For the record, you just made my entire day.” I told her to fill the silence while I waited.
“How is that?” She asked, with a puzzled look on her face.
“Because I was pretty sure that everyone I have dealt with today was well aware that I was a Matthew.”
"No, I don’t think so. So, how old is this picture?" She asked, still looking back and forth from it to me.
"Well, in Texas you can renew your license online, so that pic is probably about 6 years old or so."
"Hmmm." She said as she handed it back to me, and then continued as she looked into my eyes. "You look beautiful."
Here's the thing. You can tell when people say that just to make you feel better. "Yes dear, you are pretty" while patting you on your head, but this wasn't like that. She really seemed to mean it, and I kid you not, I choked up a little and it took me just a second to respond.
"Thank you - so are you!" I told her softly, and received a self-depreciating laugh from her.  I really meant it though, because with one kind comment, she had turned my dreary day into a brilliant one.
If that isn't beautiful, I don't know what is.
Posted by Kimberly Huddle at 9:14:00 AM 16 comments: