The World Has Gone Mad

I suppose I could just about stop there. Enough said. Got my point across! Thank you very much – have a nice day!

Trumps own advisors admit that he never expected to actually make it this far. More or less, he ran for office as a publicity stunt and now finds himself quite possibly headed for the White House.

Hillary Clinton I have mixed feelings about. People died under her watch that some people feel she had the ability to save. I’m not so sure about that myself, but what the hell do I know? As far as the “email scandal”? I quite honestly couldn’t care less. It barely rises above the cosmic noise level for me. Something of little to no significance that her opponents are desperately trying to build into something momentous.

Bernie Sanders? Say what you will, but I think most people that are honest with themselves will admit that he is the one person running that actually cares about the average person like you or I. They can call him all of the names that they like, but he actually cares. You gotta respect that, no matter what you think of his ideology. It wont do him any good though, because he has been almost totally frozen out of the process. Honestly, when it comes to political office, being a nice guy is probably not an asset.

And with all of the worlds serious problems to consider, the American public is fixated on where the Transgender folks are peeing. In all of recorded history, there is not a single documented case of a TG assaulting someone in a bathroom, but suddenly the threat of having a transsexual peeing in the stall next to you is the most significant threat to our society and the welfare of our children. While the TGs are standing around with their legs crossed and their eyeballs floating because they are too scared to go to the bathroom, we have terrorists setting off bombs in Target bathrooms– a large corporation that came out in support of the transgender. Yes, I called them “Terrorists”. What do you call it when a Muslim blows up something because it doesn’t conform to his beliefs and it offends him? The American people would shout “Terrorism” at the top of their lungs so I figure the shoe fits.
/Rant

So the other night I was talking to one of the most beautiful women that I have ever met. Not only is she exceptionally pretty, but she is also damned intelligent, and a caring person. Like I said – beautiful. Much to my surprise, she shared with me that she had felt ugly and awkward growing up and it just kind of floored me. Apparently these feelings are not reserved for the TG and this lovely bit of depression is not our sole domain. If even beautiful women feel ugly and awkward, I suppose that people like me can be forgiven for our own feelings of inadequacy. 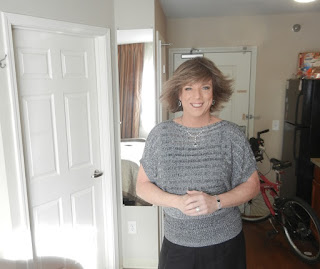 I took a break from this long term project that I am working at and drove to the tippy top of Ohio to take care of another customer. Ashtabula Ohio to be exact. A real hot spot of social activity there boy, let me tell ya’!  You should have seen the look on the faces of the clerks behind the counter when I arrived at the Holiday Inn there. There were four young men talking behind the counter, and I’d swear you could have heard a pin drop when I walked in. Instantly, three of them vanished and the one remaining young man was left to deal with me. I guess that he drew the short straw. He got over his surprise and acted like a professional though, so it’s all good. 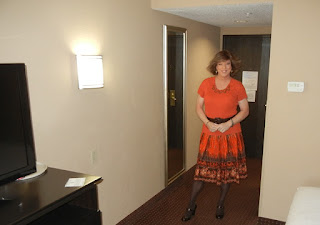 On the drive back down to Indiana I decided to wear something nice and subtle. OK, maybe not so subtle. Is orange subtle? Prolly not. I still can’t decide if it was a flattering or not? I wouldn’t have chosen the dark hose, but I have a huge, ugly, bruise on my left leg that needed to be hidden. It is what it is.

Don't worry, I have no intention of turning my blog into a social commentary or anything of the sort. Let's face it, I'm not qualified nor am I terribly interested in joining the cacophony of people all trying to out shout each other these days. Still, I'm going to share this video along with a simple observation. I don't care where you stand on the concept of the transgender; anyone that can look at the sheer joy and happiness in young Corey Maison's eyes and feel that she does not have the right to exist, sucks.

I can remember going to bed at night when I was 6 and 7 and wishing and praying that I would wake up as a girl, but of course this was the real world and that doesn't happen. I grew up pretty much hating myself and feeling utterly "wrong" in ways that I can't even really describe. Never felt like one of the guys, and clearly wasn't one of the girls either, so I just settled for being seriously depressed for the vast majority of my life. So much has been learned since the 1960's and 1970's when I grew up, and we now know so much more about the topic. For young Corey and countless other children like her these days, they don't have to go through this painful incongruity. They can live normal and happy lives, where they feel like a complete and whole human being. That is, they don't have to suffer unless other people choose to make them suffer. So how about the human race just decides to act like grownups?

Now - about this video. Lots of people comment on how pretty she is. Yes, she is pretty, but the world is full of pretty girls, so that is not reason enough to love this video. What I adore about this video is the sheer joy in her eyes - the over whelming happiness. Instead of growing up all wound around the axle about who she is, and tied up in knots inside of herself, she is joyful and free. Fly Corey - fly for all of us that can not.

Oh, and just for the record, at 14 years old, no youngun, you can not wear high heels to the grocery store. . .