So not what, a week after saying that I thought I’d pretty much had it with flying pretty, guess what I find myself doing? Yepper, I’m sure that you guessed it . . .
I made several trips the old fashioned way, you know,  dressed like a dude, but it was killing me. I spent each and every trip obsessing about it, envious of the ladies, and feeling sorry for myself. After three or four trips this way, I decided that I’d had enough and so got back onto the horse.
Given that I’ve been suffering from a fairly serious lack of confidence, I decided to wear one of my favorite outfits that I felt confident in, and so out came a purple top and my black Palazzo pants. 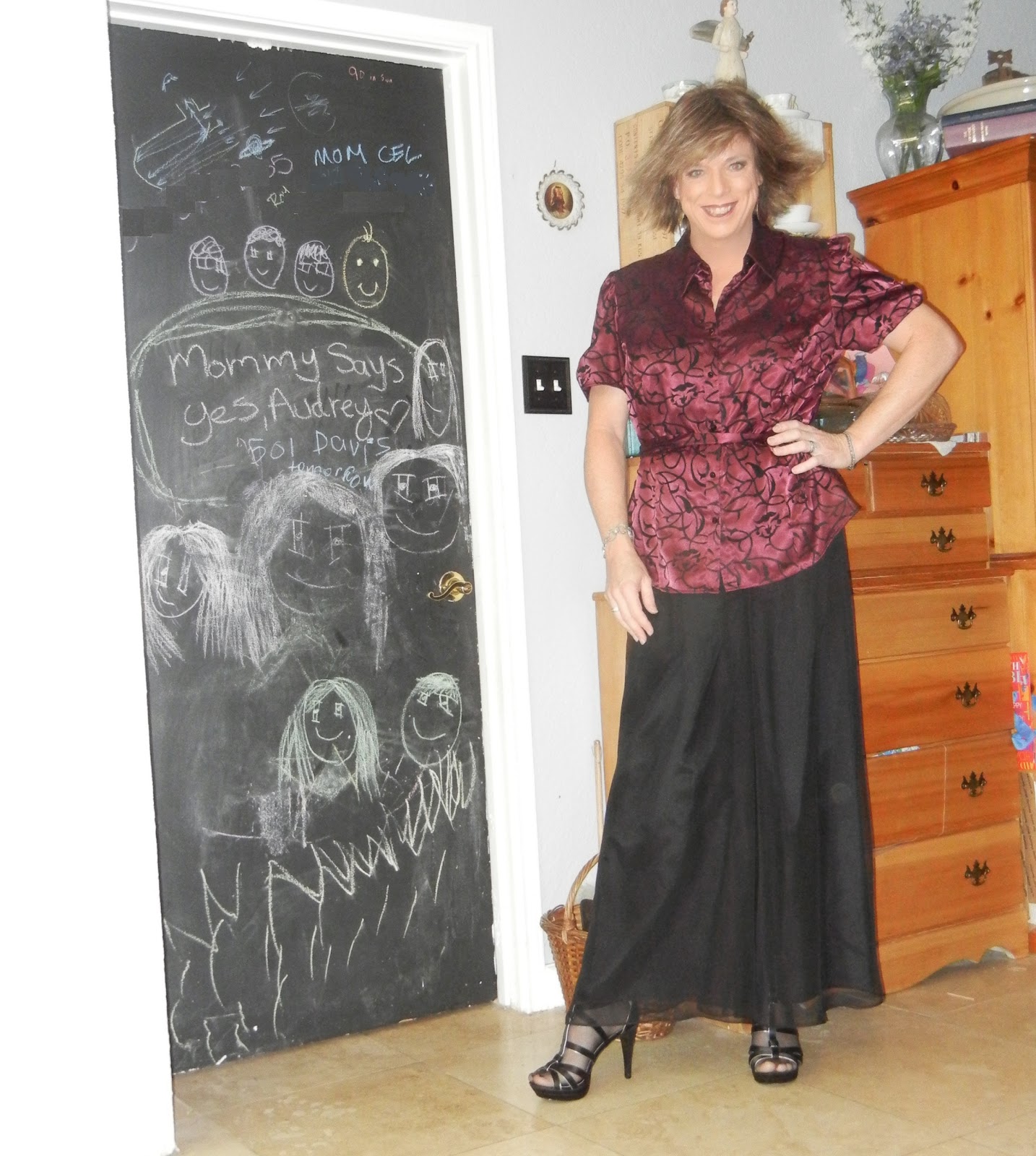 When I parked my Mustang in the airports parking garage, I was gonna stop and take a photo or two of a beat up, wrinkled, old cross dresser in front of it, but as soon I opened the door and the heat came flooding in, I knew that was outta the question. It was so hot that in the brief period it took me to gather my backpack up, I was already feel perspiration forming on my forehead. No way in hell I was gonna stand out there in that kind of heat trying to snap photos. I would have smelled like a goat by the time that I got into the airport!
My confidence got a quick boost when a man stepping off of the elevator as I approached it actually jumped back to it and held it for me as I approached, towing both of my large bags behind me. I thanked him and then made my way to the check in counter at Delta. One of the gentlemen at Delta that has always been remarkably friendly with me greeted me at the counter, and I was amused to see that he had gone entirely bald and apparently chosen to shave his head. I couldn’t  help but grin, knowing that under my wig I was every bit as bald as he.
“So, umm, is it just me, or have we gone a bit shiny up top??” I asked him with a smile, and while patting my own head with my hand.
“Yeah, I finally gave in and went ahead and shaved it!” he replied with an embarrassed smile. He was so clearly embarrassed by my comment that I felt guilty for having made it, but it was too late now! He has been checking me in at Delta for years now and knows exactly who and what I am, so I almost told him that I have the same problem, and wanted to tell him ‘I feel your pain brother!’ but it just seemed wrong so I let it go . . .

I was working at the Purdue University where they are experimenting with rocket propellant and using our equipment in the process. At one point we stepped away from the area where we were working, and when we returned, we both smelled something burning. I made sure that the smell was NOT coming from the FTIR that I had just repaired, and then I started throwing my test equipment and tools back into my box. She just looked at me kind of odd.
“You guys work on rocket fuel here, and now we smell something burning and can’t figure out where it’s coming from? Yeah, I’m getting the hell outta here!” I told her with a wink. Once she started laughing, I figured the joke was over, and started pulling my equipment back outta the box. We never did find out where the burning smell was coming from, but I haven’t seen any news stories about the university going up in flames, so I assume it’s all good . . . 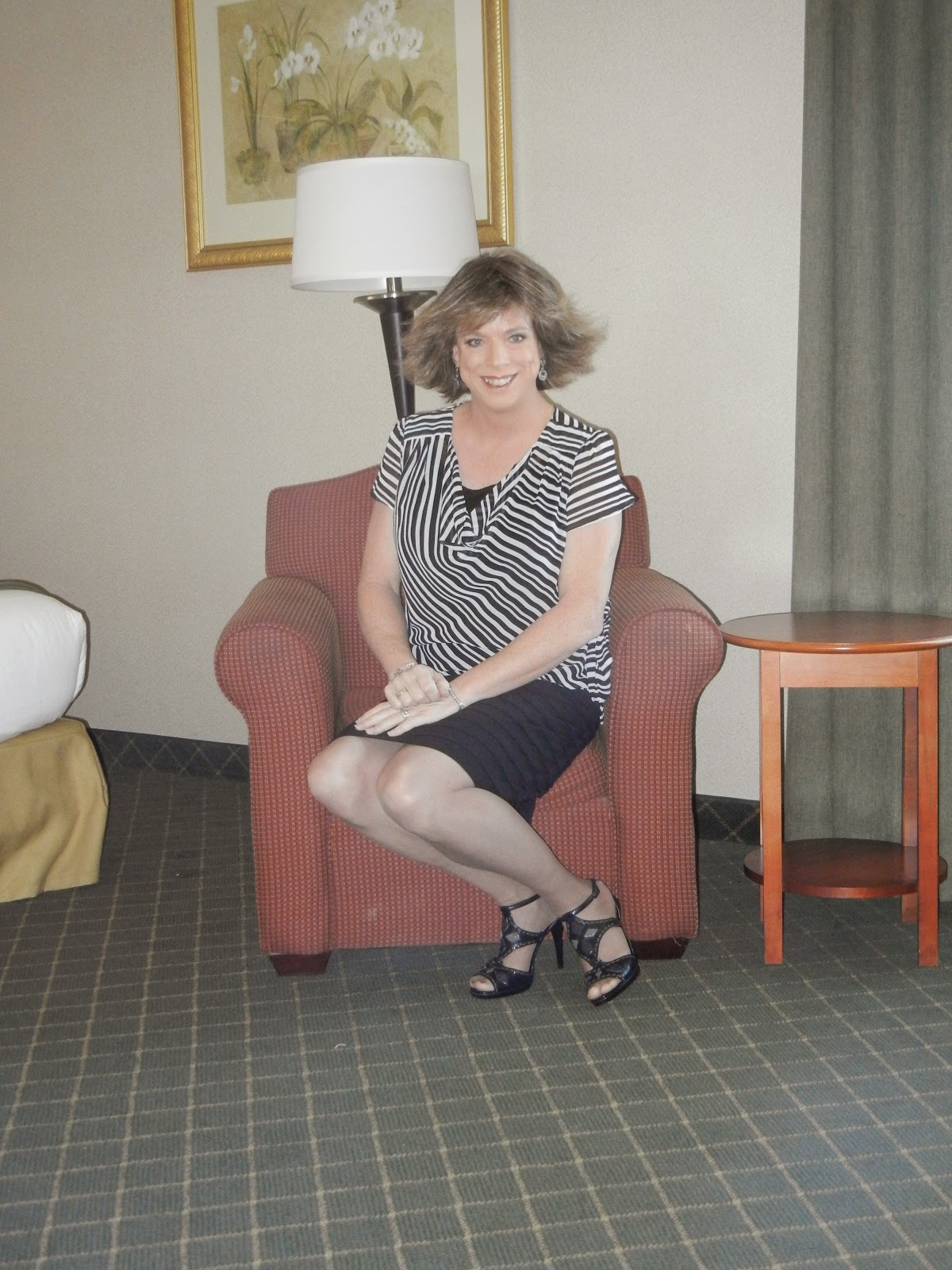 I’ve always been embarrassingly honest in my blogs, telling the good with the bad, the proud with the embarrassing, so I see no point to not telling it exactly as it feels and seems to me these days. On my flight home, I had the overwhelming feeling that those that I encountered knew exactly what I was and were just tolerating me. Very few people bothered to speak with me, and those that did, didn’t seem all that thrilled about it. I don’t know if that is real and accurate, or if it is just in my head, but there you have it. I feel torn between a rock and a hard space when it comes to flying pretty now. On the one hand, I often feel like I am nothing more than a chubby old man wearing a dress these days, but if I don’t fly pretty, I am fairly wracked with depression and envy. Can’t really win with those choices!
Posted by Kimberly Huddle at 2:01:00 PM 14 comments: