So my latest trip was to Detroit on Sunday 16 Dec where I planned to work with my customer on the following Monday morning, then get on a plane for Indianapolis that evening to work with a customer there. My trip to Detroit was supposed to be about 6 hours long, giving me all day Sunday to play. For that matter, I had seriously considered flying "dressed" for the first time since it was a short flight and I didn't have to see the customer until the following day. Luckily for me, my wife talked me out of flying dressed because the flight to Detroit turned into a nightmare of canceled flights, re-routing, and delays. The trip that was supposed to take around 6 hours took over 21 hours. Had I flown dressed, the cat would have been outta the bag after about 12 hours when the beard would have started showing!

So they boarded us onto the plane from Atlanta to Detroit, let us get all seated and belted in, and then told us the flight was canceled due to weather.
Then they set me up on a later flight - that was canceled.
They offered to fly me into Grand Rapids, around 100 miles North of Detroit, but I figured if the weather was so bad that a huge airport like Detroit had to close, then I darn sure didn't want to be driving 100 miles in it.Eventually they rerouted me through Memphis and then onto Detroit. The flight to Memphis was then delayed so that I had to run like hell for the connection and I just barely caught the connection.

By the time I make the lost baggage claim, get the rental car, and drive 40 miles north on the ice and snow, it's about 1AM when I get to bed. At 5AM the airline calls to tell me my tool box has been delivered to the hotel!

Monday I got the Detroit job done and moved on to Indianapolis for the next service call.


No problems this flight but apparently I ate something I shouldn't have and got food poisoning. Tuesday I spent with bad stomach cramps and. . . well. . . no delicate way to say this . . the "runs" . . . and I had them BAD. I didn't feel too bad other than that, I just couldn't get more than a yard from the bathroom. This was a bit uncomfortable as my customer was a 40 minute drive from my hotel.

Tuesday night when I got back to the hotel from my customer I had to go to the bathroom VERY bad, so I grabbed my laptop, locked the car, and ran like hell for the room!I was supposed to go out with Gina that night, but I decided to throw in the towel and called her to explain that I just couldn't do it. I then crawled into bed where I would sleep for about an hour and half, run for the bathroom, then go back to sleep for two hours, etc.

The following morning when I got to my rental car to make the drive back down to my customer, I discovered that in my haste to get to my room the night before, I had left my GPS hanging on the windshield. Yup, you guessed it, some no good, low life, scum sucking, son of a dog busted out my drivers window and stole my brand new, less than a week old GPS unit.

I know that a $250 GPS isn't worth someone's life, but right then I would cheerfully murder the guy if I could get my hands on him. The rental car company brought me out a new car, I bought another GPS, and went back to work.


That night I met Jenny for dinner.

I'm not sure how much Jenny would be comfortable with my speaking about here so I wont tell you much about her other than the fact that she was a very nice person and it was a pleasant evening. Still didn't feel very good and so called it a night after dinner and went to bed.
Fortunately the next day I felt a LOT better and went got to hang out with Gina again.


We went to English Ivy's for dinner as usual, and then went to The Metro for drinks and karaoke The last time I went to karaoke there it was awesome. this time it was kind of sad in comparison. I also found myself choking on the smoke in the place - I don't remember it being so bad the last time. Now my clothes and hair reek of cigarette smoke! :-(

Friday I woke up at about 3AM to discover that what ever it is I had, food poisoning or something else, it had NOT left me after all. I spent the entire trip home running from bathroom to bathroom. Pretty sure this trip goes down in history as my very worst ever and I just couldn't wait for it to end! The good news is I lost about five pounds and now weigh 145!
Darn shame it will be temporary!
Posted by Kimberly Huddle at 10:00:00 PM No comments:

This weeks trip was to Lexington Kentucky. I searched the Internet for things to do here and about all I could find was horses, horses, and more horses. :-)
Well, I guess I'll just have to go shopping! I found the Fayette Mall and took a walk through it. 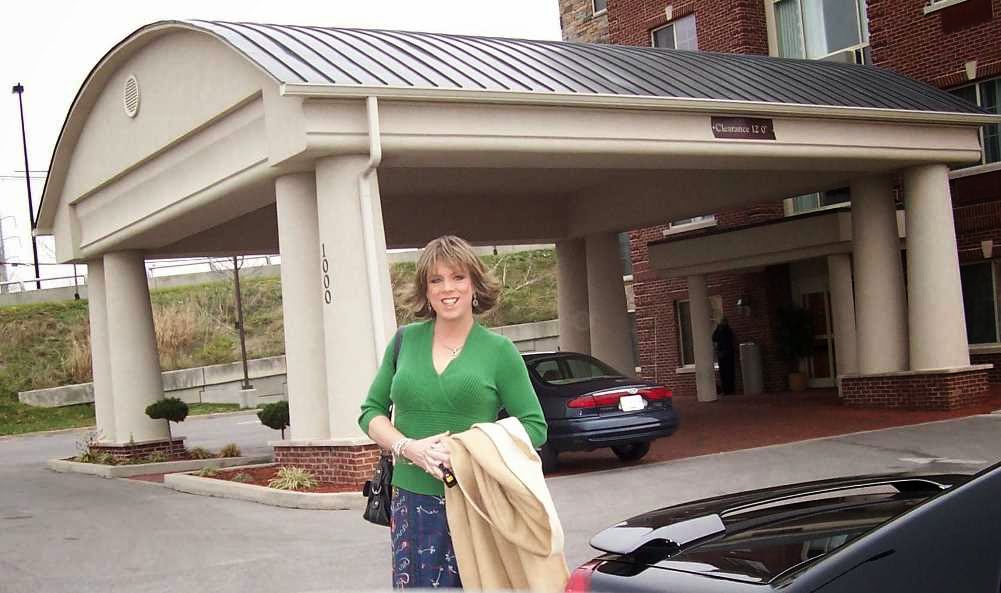 I found a few things I liked, but nothing I couldn't live with out. The good news is, as far as I could tell no one made me, so life was good.
After the comment I received at the Glamor Boutique, I decided to try hip pads. The off the shelf apparel with hip pads incorporated just didn't seem to look right on me. Either I looked like I had dinner plates on my hips, or tennis balls - no happy medium, so I made my own. 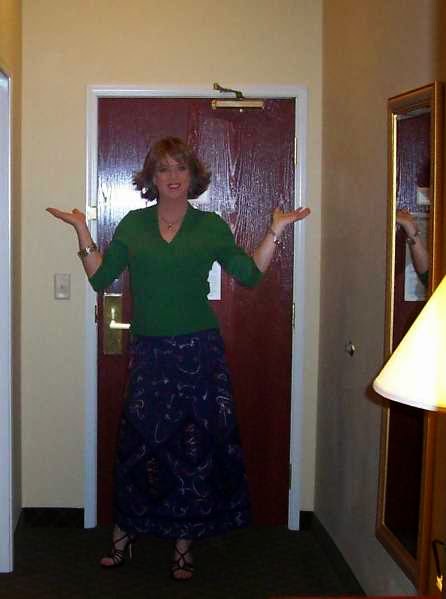 I think they DO help my appearance but they are a pain in the butt! Have to wear a girdle to hold them in place, and lord help you if you have to go potty, because getting them back in the right place takes a bit of effort! Do you think they help my look enough to be worth the hassle?
Did my window shopping and then decided to hit up "Mia's" for dinner. Mia's is a small "friendly" bar that also serves food, and I've got to tell you, it was a darn good meal! I ordered a long island Iced Tea and darn near fell off my stool when I took my first drink of it. They don't hold back the alcohol there!
It seems like there were several small groups, all doing their own thing, and I sat at the bar pretty well bored outta my mind. Spoke with the bartender a bit - it turns out we were both into the "Tin Man" series currently airing on Sci Fi. She turned the TV on to watch it, but had to use closed captioning which makes for a bit of frustration. I'd been there for a little over an hour when two ladies sat next to me and I struck up a conversation with the one closest to me - Sharon. Turns out that she is from Texas, only a couple of hours from where I live. We talked a long time. She and her wife (get a grip, this WAS a lesbian bar!) manage the club down the street "Club 141/Z1" I think it is. She was a very nice person and I really enjoyed talking to her! The club they manage was not open on Tuesday nights, so I think I'll have to try and look them up when / if I get back there.

Got a call from Beth - turns out that she can get out! 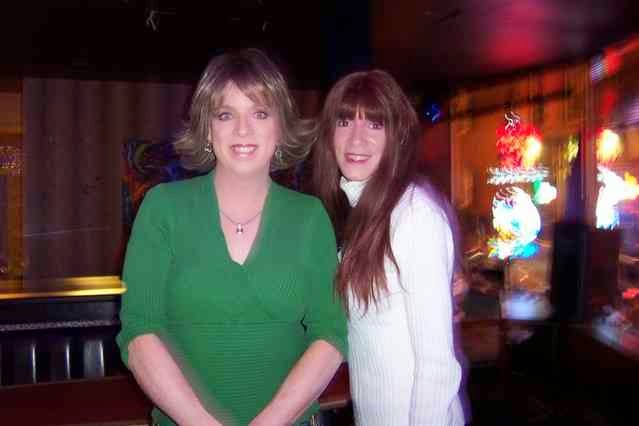 Beth is gorgeous and has a little bitty figure I'd kill for. I asked her if she did marathons and ate only rabbit food - she assures me she isn't an exercise fiend and eats like a horse. I'm pretty sure I hate her. Just teasing - Beth is a VERY nice person and I wouldn't hesitate if you get the chance to meet her!  My only regret is that with her work schedule, and my having to catch a plane in the morning, it seemed that she had just got there when I had to leave. With any luck, we will have more time if I get back again.
Posted by Kimberly Huddle at 9:58:00 PM No comments: