Well folks, I've always hated those stupid things where you read warped letters and have to verify that you are human by telling the web page what letters you see, but it seems that I have no choice. Some asshat keeps posting dozens of spam links in comments to my posts and so it seems that the only way to limit this is to require posters to jump through hoops.
I just wanted to let y'all know WHY I was going to enable the feature and let you know that I regret having to do it. I hope that you will still take the time to make comments, because that really is what makes this all worth the while to me . . .
Posted by Kimberly Huddle at 9:57:00 AM 7 comments:

After paying one backyard mechanic, and then later on, also paying a rip off artist who owns a classic car repair shop, I've finally had to break down and take my Mustang to a professional transmission shop. One day I tried to back it out of the garage and it just refused to go anywhere.
When I checked up on it a day or so later, the owner took me to where my transmission was up on a stand and most of its guts laid out on a bench.
"This," he said, slapping down a large square gasket "is clearly a factory original gasket. "
He plopped down one or two other gaskets of various shapes and sizes after it.
"These are ALL 45 year old, factory original gaskets! Do you see this plastic ring?” He asked, holding up a small plastic ring so that I could see it.
"Yes?" I replied.
He flexed his fingers and the ring crumbled into hundreds of pieces.
"Wrong! It's not supposed to be hard and brittle. It's SUPPOSED to be a soft and pliable o-ring and is what is supposed to be keeping the majority of your fluid inside the transmission. As far as I can tell, the guys that you had work on your transmission only replaced the torque converter, the front and rear seals, and painted the thing for you."
"Oh my God . . . " was about all I could say. All of the money I had paid out, all of the stress and agony, and neither one of those assholes that I had paid and trusted had done much of ANYTHING! Heck, my wife and I had replaced the front and rear seals ourselves, so they hadn’t even done that!

The good news is that my pretty Mustang now has a transmission that really HAS been rebuilt and she and I are loving it! In fact, now that it is running so well, I decided to spend some time and effort on the interior! I've gotta admit that my heart was in my throat as I started yanking the console and seats out of my car - I've never messed with a cars interior before! Still, in a few hours I had the old and nasty carpet out, and then had to take a break and wait for the antihistamines to kick in! You would be shocked at how much super fine and nasty dust falls under a cars carpet in 45 years and I had kicked it all up and into the air in the process of pulling the old one out.

As these things always do, my replacing the carpet turned into a few other tasks as well, as I discovered that much of my old center console was not in as good a shape as I might have hoped. I ended up having to do a lot of epoxy work on it, and then when that was done, decided that some of the decorative polished aluminum was just too damned scratched, dented, and ugly to stay. A quick trip to Lowes got me some aluminum sheet metal, but there was nothing quick about the work required to cut, file, and polish it! THAT took a good solid eight hours of work, but it was all worth it!
And I present the brand new interior of my lovely classic: 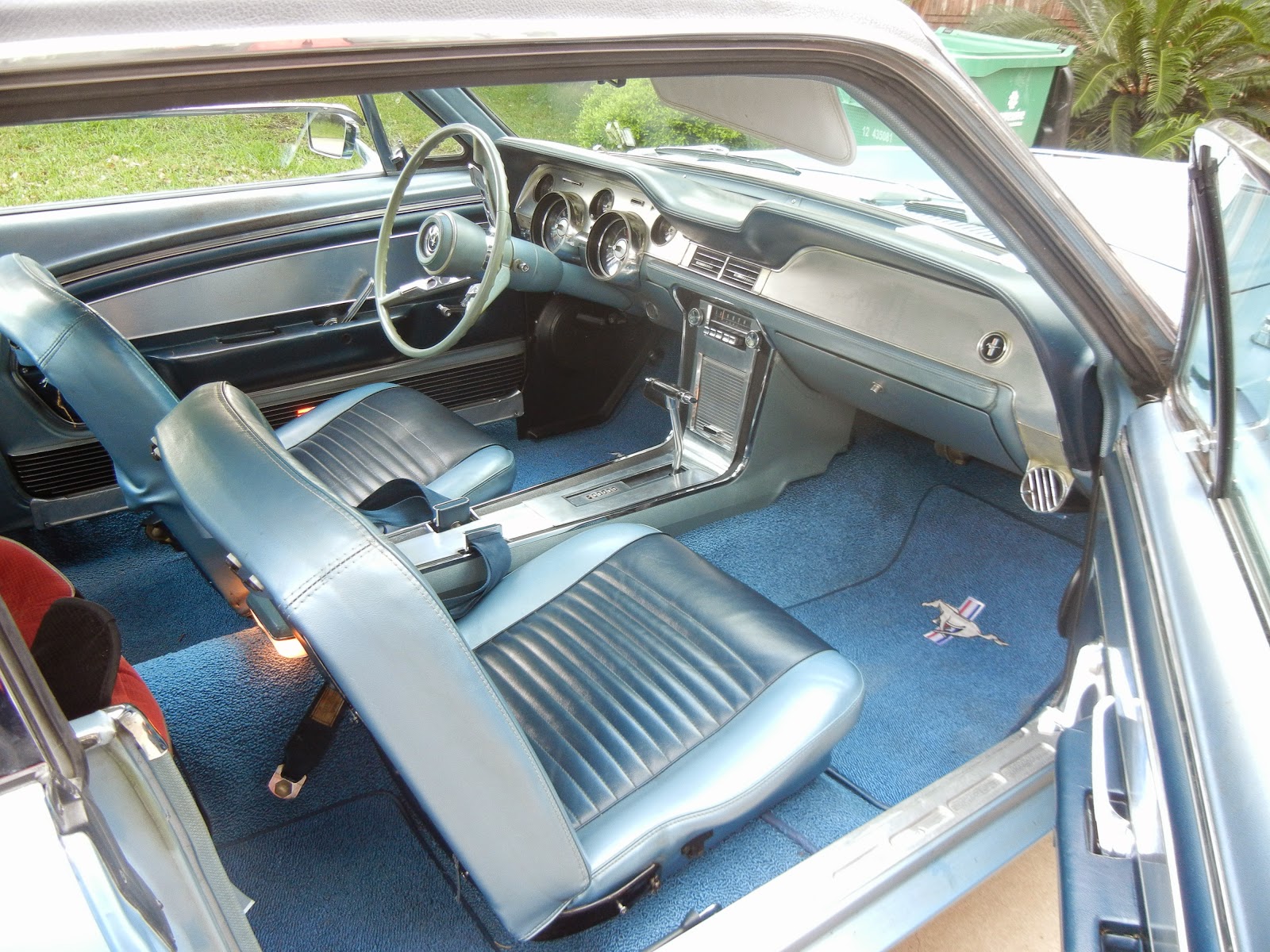 Would you believe that I'm suffering from two problems? An almost complete lack of desire to travel the country pretty and a fairly serious lack of confidence for doing it.  I suppose that to be honest, it's really one problem with two obvious manifestations. As is often the case these days, I haven't had even a chance to be pretty in more than a month. All of my service calls have been reasonably local and so involved only lots of hours on the highway. Well, today I had to go direct form San Jose Ca to Detroit and I really had to work pretty hard to get up the nerve to fly pretty. I was all ready and had all of my shit together when I did something stupid. I was yanking the old airline tags off of my baggage and it didn't want to come free. I pulled a bit harder, and to my satisfaction, the damn tag did at last come free, but of all of the idiotic things, I more or less punched myself in the face when it finally gave.
Back to the mirror to repair the makeup I had just screwed up . . . 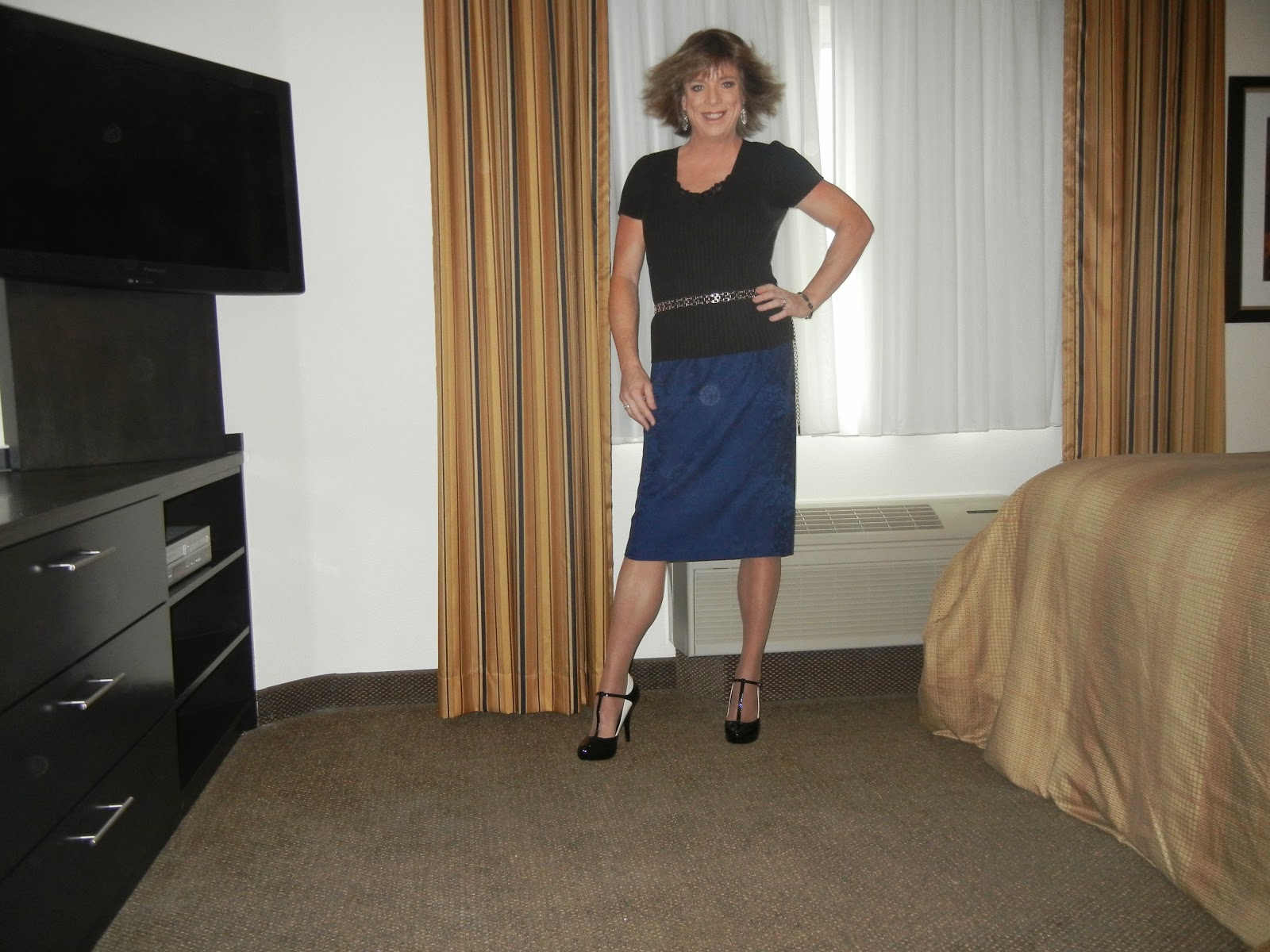 After going through the TSA check point, I was sitting down and putting my shoes back on when a male TSA inspector walked by and casually commented that he liked my shoes. Pretty sure that he was teasing but I'm not positive. If he DID like them, I'm thinking that he was the only person that did today. I encountered something new to me today - what my wife calls the "stink eye". This is when a woman looks at your outfit and makes it clear that she doesn't approve. I kid you not, I saw at least three women look at my shoes and more or less give me "that" look. You know, that look that says "wow does that look wrong/bad".
Oh well, it is what it is, and I liked them, so they can just bite me.
I didn’t make the cut for the free upgrade to first class this time, and so I was stuck just behind the first class section in coach. About an hour and a half into the three hour and twenty minute flight, I reached the point where I had to get eject some of the coffee that I had drank that morning. As they were giving their whole safety presentation, they did specifically ask that you use the restroom in your cabin/class, but I looked to the back of the plane in despair – there was a line of about four people already waiting for it. I looked at the bathroom in first class, only a dozen feet away from me, and it was empty and unused. While I’ve never done it myself, I’ve seen dozens of people from coach step up and use the first class bathroom, and no one has ever said a word to them. I was pretty darn desperate and so decided that I would do this, but the flight attendant apparently didn’t agree with my actions. I got about half way there when the male flight attendant stepped in front me.
“Can I help you?” he asked.
“No thank you, I just need to use the bathroom.” I replied, trying to smile even though I was pretty much doing the potty dance at this point.
“I’m sorry, but you will have to use the bathroom in the coach section.” He told me.
I was kind of surprised, because like I said, I’ve never seen them actually stop someone before, but I wasn’t angry or anything like that. After all, I knew darn good and well that I was doing something that they had specifically asked us not to do, but still, I was bit irritated as I turned around to look at the bathroom in the back of the plane that now had five people waiting.
“Really?” I asked him, making it fairly clear that I thought he was being a bit of jerk, but he didn’t bother to reply. He just stood there in my way until I turned around and headed for the back of the plane. Near the end of the flight, he approached my seat and knelt down to speak to me.
“Listen, I just wanted to make sure that you knew I would have stopped anyone, and that it had nothing to do with what  you . . . “ he paused, clearly looking for words that would not offend, “ that it was nothing personal against you. If I let you use that bathroom, I would have to let everyone else use it too.”
“It’s no problem – no worries!” I told him. Not much point to getting upset about it when he was just enforcing a rule that I had knowingly ignored. Still, something about the whole situation did manage to just depress the hell outta me. I really don’t think that he would have stopped anyone else. In more than a decade of flying, I’ve seen dozens of folks doing what I had done, and not one single time have I seen someone stopped for it. As stupid and silly as this all sounds, it bummed me out and I’ve been pretty seriously depressed ever since.
Pretty silly huh?
Posted by Kimberly Huddle at 7:37:00 PM 14 comments: