Did you try turning it on?

So the day got off to a bit of a rough start. Normally I am up and at it at about 3AM to catch flights, but today's flight didn't leave until almost noon.  As the flight left so late in the morning, I figured I'd wait until after the wife had gone to work and the kids were gone to school to get ready. I told my daughter the night before that I was gonna let her walk to school in the morning as I wouldn't have time to take her and get ready, and she assured me that she was fine with that. That was the plan anyway, but it didn’t work out that way.

The following morning, it turned out that my wife was not feeling well and so she decided to stay home and take a sick day. The catch is that at some point, she told my daughter that she would take her to school, but the more that I thought on it, the more I figured that I was being an asshole if I let my sick wife drive my daughter to school instead of doing it myself. So, on this rare occasion, I stepped up and did the right thing instead of the selfish thing, and I took the critter to school.  My daughter has taken to drinking coffee lately, and when she got into the truck, she more or less balanced her coffee mug on the dash and I failed to notice it.  About thirty seconds later, as I made the first turn, her coffee mug fell over and landed on the floorboard at my feet, soaking the carpet, and splashing coffee up on all of us.  Sigh. . .
Since I was still wearing sweats and would be changing anyway after I dropped her off, that was no big deal for me, but her skirt had several prominent coffee spots on it, and so I offered to take her back home so that she could change.  The thing is, she knew about my plans to fly pretty today, knew I wouldn't have the time to get ready if I had to wait for her to change before taking her to school, and so she flat out refused.
"Nope, I'll be fine.  Besides, my tunic covers most of it, see?" She said while tugging her top down over her skirt to prove that it would be covering the worst of it.
"Are you sure?" I asked her. "I don't mind taking you home to change sweetheart."
“No. You don’t have the time to take me home and get ready!”
“Yeah, but maybe I should take mom being sick and all of this as a hint from the universe to not do it this trip.” I told her with a grin.
"Nope, not a problem.  You don’t get the chance to fly pretty much these days so you go and have a good trip!" She insisted.
I'm thinking that both her and my wife are better people than I am. They both tend to put other people first when I am pretty sure that I would have been selfish and insisted on going home to change. Anyway, I got her off to school and then did indeed have plenty of time to get myself ready. It was a wee bit awkward as neither my wife nor I are terribly comfortable with her seeing Kim these days, but it is what it is. 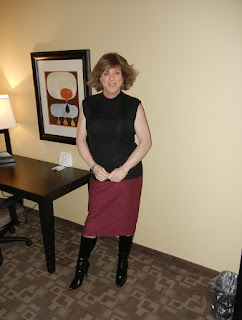 As much as I thought it wasn’t possible, the problem with the huge bumps on my legs has actually gotten worse. It has often hurt so bad, and with such a sudden and stabbing pain, that I often find myself reflexively looking down and expecting to see some sort of open wound or a knife sticking out of my leg. Well, for the first time in all of these years, I wasn’t totally disappointed when I pulled up my pant leg, because I found a large wet spot on my sock over one of the bumps where nasty stuff actually was leaking out of the nodule. Needless to say, there was not going to be bare legs in my future for a while, not even with tights, and so I broke out a pair of boots that I had bought over a decade ago but only worn once. I bought them for those occasions when I was traveling to very cold places, but I found them to be quite a bit less comfortable than your average heels, and so never really wore them. It’s not that they pinch or don’t fit well, its just that they kind of force your calve and foot to stay at an angle that doesn’t feel as natural as your typical heels. Say, did you know that the interior of boots tend to degrade and shed material with age if you don’t wear them for years? Yeah, when I took them off to go through airport security, my calves and feet were mostly black and covered with little flecks of fabric. This, in concert with the large red nodules all over my legs, definitely didn’t make for the most attractive legs that you have ever seen. The mornings mishaps, the discomfort in my legs, and the fact that I was going to train a customer on a machine that I haven’t seen in a decade, all combined to make me a jittery and nervous wreck. I honestly wasn’t that surprised when my IPAD slipped out of my hands, fell to the floor, and went skating down the aisle of the plane while I was trying to put my bags into the overhead bin. I looked at it in disgust and seriously considered leaving the damned thing there for its impudence, but it cost me too much to leave it there regardless of how irritated I was with it.

Once I arrived in Omaha, I had to stand in a short line of people that were waiting for the shuttle bus to the rental car lot. There were two men standing behind me and talking to each other, and one of them decided to strike up a short conversation with me.
“So that’s tools I assume?” he asked me, pointing with his chin at my toolbox.
“Sure! That’s how I earn my paycheck!” I told him with a smile.
“Yeah?” he asked, clearly not at all amused with me or my smile. “What do you do?”
“I’m a field service engineer.” I replied to him.
“No kidding.” He responded with the driest, most sarcastic tone of voice I’ve ever heard, and then he immediately turned back to his friend, quite obviously dismissing me. Mind you, I am an expert at sarcasm and at being an asshole, but I was seriously impressed with the sheer contempt that this man managed to convey with so few words. I think I’d have to give him at least a 9 and perhaps even a 10 as a score.

At one time I was extremely comfortable with the system that I was here to provide training on, I’d even written the software that once automated an optional version of it. The thing is, I hadn’t laid hands on one of these in a decade or more, and so was way out of practice. Imagine my anxiety when I turned on the main breaker on the rear of the instrument but only half of the systems powered up. Not only was my customer standing there watching me trying to figure out where the problem was, but our regional sales manager was also there from Colorado to try and learn a bit about the system. The customer had offered to take us on a tour of their factory, and so I encouraged them all to go on about their tour while I grabbed a volt meter and tried to track down the source of the lack of power. They had been gone for about 5 minutes when I realized what I had done wrong, and I pretty much had to talk myself out of pounding my head against the wall in frustration at my own stupidity.
“Well, I’ve got good news and I’ve got bad news!” I told them all when they returned a few minutes later.
“Yeah?!” the customer asked me with a serious look of concern in his eyes.
“Welp, the good news is that there is absolutely nothing wrong with your system.” I said, pausing for the dramatic effect.
“And the bad news?” asked our regional sales manager.
“They sent a complete idiot to train you.” I replied, hanging my head in shame as I reached out and pressed the bright green indicator/switch that was clearly marked “Power On” on the front of the instrument. I’d noticed it when I was setting everything up, but I’d forgotten that it was an indicator and a switch, and so I’d failed to press it. So here I was to train a customer, in front of our regional sales manager, and I’d forgotten how to turn the darn thing on. Sigh . . .
Posted by Kimberly Huddle at 3:22:00 PM 9 comments: