So on the way to work in Austin Texas this morning my wife and I are listening to the JB and Sandy morning show on 94.7. Sooner or later the topic comes around to the fact that Oscar De La Hoya has apparently been outted as a crossdresser and now the poor guy has his pics posted all over the internet. The JB and Sandy radio show is usually pretty humorous and so I fully expected them to take full advantage of the opportunity to make fun of Oskar and crossdressers in general and was pleased when they didn't!
Oddly enough, the one that seemed the most put out by it was Autumn, a young lady you might consider sort of a sidekick of the show. While I don't recall her exact words, the gist of her comments was that it was weird, and how could he do this being a husband and father of 4, and how could he be gay, etc.
To my surprise, JB and Sandy both spoke up saying things along the lines of "we all have our things we wouldn't want everyone to know", and "what's so bad about it, he isn't hurting anyone". I was so impressed that when I got to the office I did something I've never done before - I wrote them an email. I told them that I was impressed and relieved that they had responded in what I thought was a reasonably adult way. I went on to tell them that most of us (crossdressers) have the same hopes, dreams, morals, and standards as anyone else. I also told them that most crossdressers are not gay and DO get married and have children, we just like to look pretty! :-)

After writing the email I packed up my tools and laptop and headed to a local customer of mine where I was working this morning. Imagine my shock when I started the car to head out and heard them already reading my letter on the air! I was stunned! Once again I waited for the other shoe to drop, fully expecting them to start taking pot shots at me - and again they didn't! They read my letter in the spirit I sent it with, and said "cool"!

So, it's a long way from being a hero of the TG revolution, but I actually got put a little good press out to the entire city of Austin Texas - how cool is that?!
Posted by Kimberly Huddle at 9:44:00 PM No comments:

Well, my second day in Richmond Virginia went well. I had three days to install three systems that we normally allocate 2 days each for and I got all three done on two days. Not only that, but I trouble shot a fourth system that was quite old and well out of warranty and was able to show my customer where the problem was with their tool and not my system - life was good! I was back to the hotel at a reasonable hour so I did the Kim thing.

This was cool as the Z2 club has Karoake on Thursday nights and the last time I went (almost a year ago) they had some outstanding talent. This night they had a few good singers, but nothing like the talent that I recall from my last visit. After a couple of Long Island Ice Teas, I got up and did a few of my favorites.
You should see the look on peoples faces when a cross-dresser gets up to sing. At first you see a lot of looks that seem to say "Oh no, that drag queen is going to try and sing like a woman - this is going to sound like Mickey Mouse!" but then when I just start to sing in my normal voice, all of a sudden the smiles come out. I had fun, and didn't make a fool outta myself, and that's what counts. 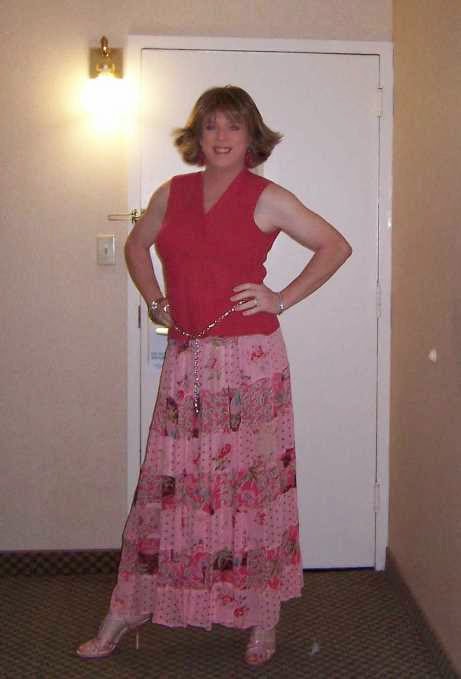 I had been wearing my favorite pink outfit so much I was wearing it out, so I had searched high and
low for another like it. This is VERY close to my favorite top and skirt, just a slightly different shade and tone - its not as dark a shade of pink:

Well, the next day (7 Sep) things went to hell. My director found out I was here, and it just so happened that one of our customers here needed the software in some of our generators changed. I'd never worked with this product, but what the hell, how hard can it be to plug my laptop in and upload new software?
Has the ring of famous last words doesn't it?

Well, the application my company sent me to be used to upload the software did not work, so I wasted my customer's entire morning and accomplished nothing. Not only that, but we wasted HIS customers morning as well. See how fast you go from Hero one day to Zero the next??


I was supposed to meet Michelle and hang out with her tonight, but I didn't get out of there until very late, was emotionally and physically exhausted, and so just ate dinner and came back to the hotel. No Kim tonight, just tired, depressed, and lonely old Matt. I miss my critters and I'm all outta hugs . . .
Posted by Kimberly Huddle at 9:43:00 PM No comments: 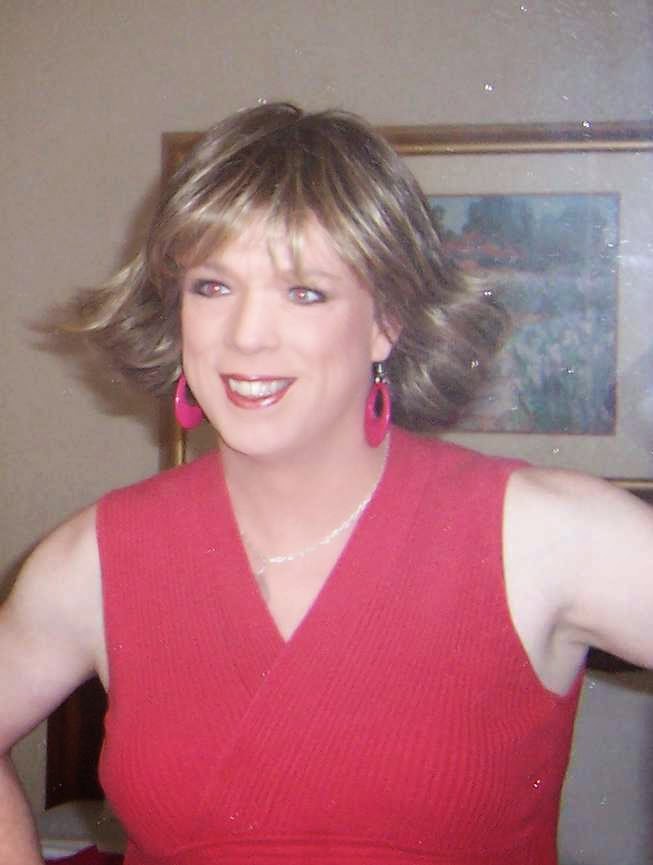 So I am in Richmond Virginia installing some of our equipment for a customer. Most of the time when I am going to be taking a trip, I'll post on several groups and forums that I belong to and ask if any one knows neat things to do where I'm going, or if any Tsisters would care to meet. Most of the time I get no reply until after I return and post a blog about it and then everyone comes out of the woodwork:
"I wish I'd known you were going to be here!"
"Too bad I missed you"
"Let me know the next time you're going to be here"
I don't know if these folks really missed my posts before I went or if they just couldn't screw up the courage to say something until after I was gone. 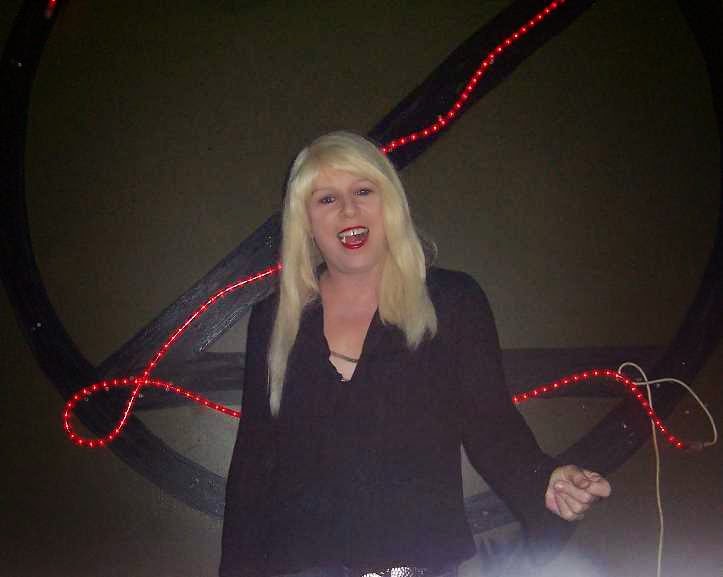 I don't know how comfortable Michelle would be with my saying much about her past, so I'll just tell we had a lot in common and it was night well spent. Thanks Michelle!

So the following day I have to go to work (that IS why I travel you know!). At one point I had to remove the side panel of our rack to gain access to the interior. The panel is probably three foot wide by 5 foot tall and heavier than it looks. I realized just how heavy it was when the darn thing surprised me and slid out of place and dropped two or three inches . . . to land on . . . my toes!
So while my vision turns to a red haze of pain and I'm biting my tongue to keep from yelling, what do you suppose I am thinking?
Am I thinking of how stupid I am going to look if I have broken my toes and have to tell the customer I have just ruined their "XX days with out an accident" record?
Am I thinking about how silly I'm going to feel if I have to take my shoe off and show the pretty pink polish on my toe nails?
Nope. All I'm thinking about is how damn ugly my foot is going to look in sandals with black and blue toes! Fortunately no broken toes, and if it did bruise, it's under that pink polish I mentioned and can't be seen!

After work, I decided not to do the Kim thing because I don't want my poor face to be raw from shaving so close so many days in a row. Instead I decide to go shopping drab. As I'm getting out of the car, I see a tall girl standing at her car and another very pretty girl a few yards away walking toward her. I could swear the girl at the car has a beard shadow but figure I've just got dressing on the brain. At least that's what I thought until the two started speaking very loudly to be heard over the cars and across the distance. Surprise, surprise, they are BOTH transgender! I was so surprised all I did was smile and say hi as I walked past them. The pretty one turned on the glam and gave me a thousand watt smile while she said "Hi honey, how are YOU doing?". That's where the conversation ended though as they both got in the car and left.
Small world, huh?
Posted by Kimberly Huddle at 9:43:00 PM No comments:

So my daughter is upstairs watching Scooby Doo while my wife and I are talking. Suddenly my daughter is at the top of the stairs yelling.
"Scary scary! There's a bad snowman trying to get Scooby and Shaggy!"
Your gonna have to trust me on this, you have never heard anything as cute as a 3 year old saying "Scooby and Shaggy". At first we had some trouble understanding what she was trying to tell us so we asked her to repeat herself once or twice. Getting exasperated that we just were not getting it, she tried to clarify things.
"The bad snowman! The abom...the admo...the barnacle snowman is trying to get Scooby and Shaggy!"
I guess she just couldn't say "abominable" so it became a barnacle snowman! We spent the rest of the weekend laughing about the barnacle snowman.

So I was in the Austin airport this morning when I saw something that struck my funny bone. A woman in three inch heels...and a cane. Now there is someone that takes fashion seriously! Having trouble walking and needs a cane, but still gonna wear her heels! Gotta love it!
The 3rd was my birthday, yet another year of wrinkles to add to the collection. Women think they have it bad trying to remain or feel attractive as they age. Try being a guy getting old and still trying to look like an attractive woman - sigh. I HATE my birthday . . .
Posted by Kimberly Huddle at 9:42:00 PM No comments: