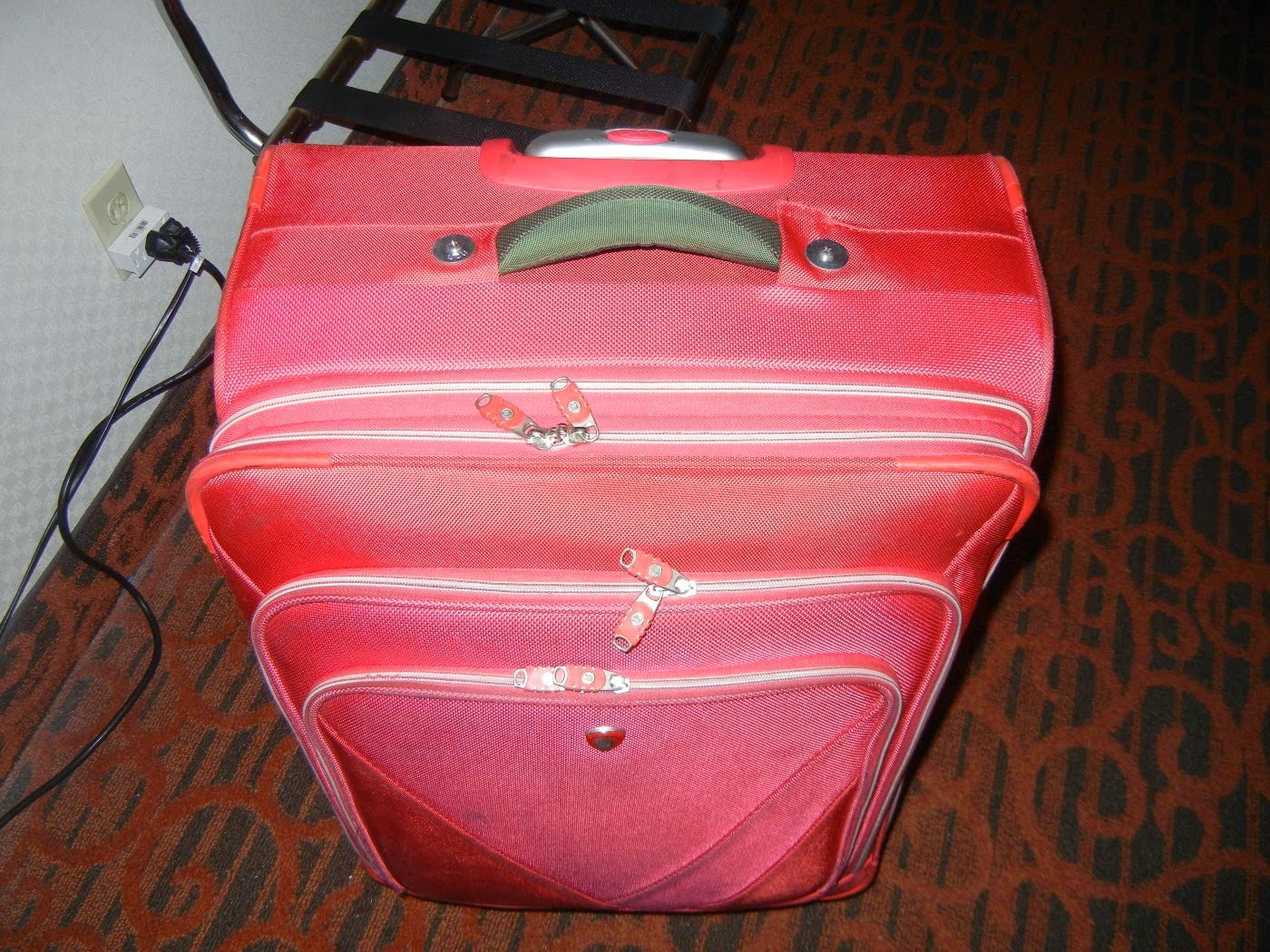 So do you remember that I wrote about the fact that the handle of my suitcase tore off of it last week? Yeah, well those suitcases are well over $100 so I decided to try a little redneck engineering on it! Having grown tired of paying for new ones once or twice a year, I kept the remains of my last dead suitcase just in case the parts might come in handy. It’s no longer as pretty or “lady like” as it was but hey, at least it’s unique! What do ya’ think?

Friday afternoon rolled around and it was off at its usual pace. I fully expected to spend the morning stuck in end-of-the-week meetings, then do a little paper work, and then probably head for the ranch at about three PM. My job works like that – I work long hours when needed and when on the road, but on the rare days when I am actually in the office, I have a lot of flexibility with my hours. Well that fine plan vanished at about 830AM when I received a call from a large customer of ours in the Philadelphia area whose entire production was shut down because our instrument had failed. He was in a world of trouble and didn’t care what it cost, but he needed someone there to fix it, and it needed to be done over the weekend. So instead of sitting around sucking up coffee and converting Oxygen into less desirable gasses at a leisurely rate, I found myself working at a frantic pace to get a quote out, make sure we had the parts that the customer needed, arrange for getting a purchase order, and then set up the trip. In my haste to do so many things at once, I came real close to accidently setting up the flight to fly into a city six hours away from my customer, but more or less by accident I caught my mistake at the last second. I’d like to say that my mistake surprised me, but the truth is that in my case “multitasking” means screwing up multiple things at once. If you want a job done correctly and very thoroughly, give it to me. If you want things screwed up royally, go ahead and give me multiple things to do at once and then stand back and watch the chaos unfold.

That night my five year old was sick and hacking up a lung, so I brought him into our bed when I was ready to call it a night. This delighted him of course, but it wasn’t terribly conducive to a good night’s sleep for meas he tossed, turned, and coughed all night long. Eventually I gave up at four AM and headed downstairs where I made a pot of coffee and then got about 45 minutes of sleep on the couch before heading for the airport as an exhausted and depressed old man with no college degree, one sick child, and one child who is sick of having a daddy who is always gone.

A couple of my favorite people live in Philly, and I let them know that I was going to be there, and so it was that Sophie and Linda agreed to meet me for dinner. (Apparently they have low standards and will associate with just about anyone, but they’re my friends so what can you do?)

I made about a half hour drive from the airport to my hotel, where I jumped into the shower and started trying to remove all of the hair that the male body insists on providing in great quantities, much to my great irritation. Well, apparently I got into a bit too much of a hurry as I just about slit my own wrist with the razor. It’s surprising just how bad a cut a modern razor can inflict when you get careless with it, and I wasn’t at all amused as I stood there watching the blood dripping off of my wrist, falling to mix with the torrent of water at the bottom of the tub, and then making its way to the drain.
My first thought was ‘Gee, at least that blood clotting problem of mine should come in handy now!’
My second thought was ‘Damn, that hurts quite a bit.’
My third thought was “Holy shit – you have bled long enough, freaking stop now!’
I kept waiting for it to stop, and waiting, and waiting . . .
After about five minutes, I said 'screw it' and just kept shaving, and it did eventually decide to stop. 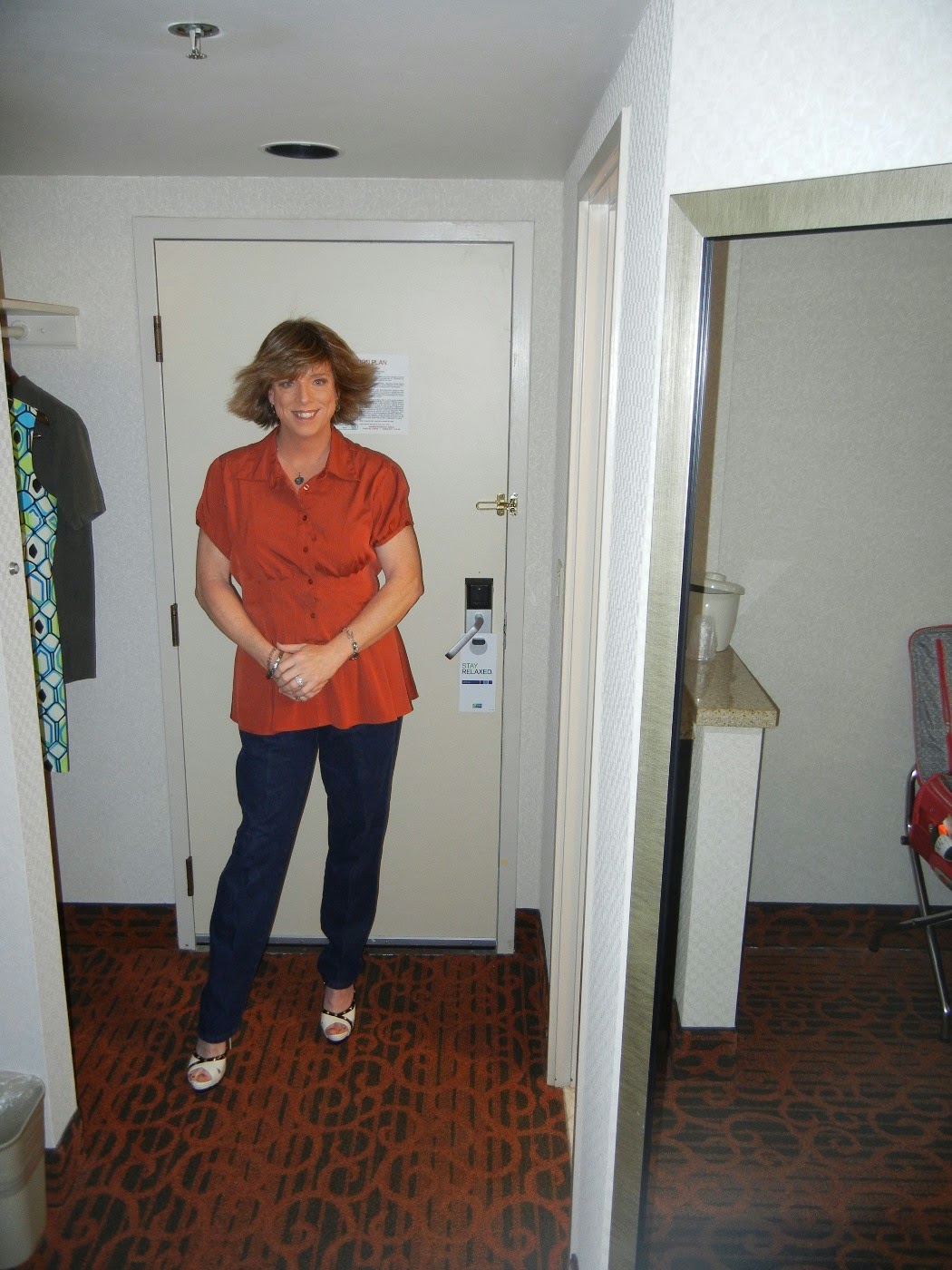 I had brought several outfits with me, and decided that I would step out of my comfort zone and try two new things – pants and pumps. I had bought these jeans about half a decade ago but never worn them out. I’d bought the blouse at about the same time, but since I’d never found a skirt that I thought it went well with, it had also never been worn, so here was my big change to do both. Just to top it off, I had a cute pair of pumps that I had bought a while back but also never worn out. I don’t wear pumps because the heels of my feet tend to lift out of them, leaving me stumbling around on a shoe that is no longer entirely on my foot, and this problem is compounded when I wear nylons. Well, since I was wearing pants, I didn’t have to wear nylons and so I thought that I might be able to get away with wearing the pumps – I was wrong.  Walking through the hotel lobby to my rental car, the heel of my foot lifted out of the shoe, came down on the side instead if inside it, and I damn near fell on my face. Then, when I got to the King of Prussia mall and made the walk from the parking lot to the restaurant, the same thing happened again, and again I almost fell on my face. Yep – the ultimate in beauty and grace – that’s me buddy, and don’t you forgit it!!

Once inside of the “Rock Bottom” where we had agreed to meet, I looked around for just a moment before spotting Linda Lewis politely waving at me from the other side of the bar, and so I picked my way slowly through the crowd to her. I walked slow and carefully, taking small steps that were not likely to end up in disaster. My other shoe mishaps had been in front of people that I didn’t know and didn’t care about, and I didn’t want to repeat the spectacle in front of someone that I knew and who could share the tale with people that actually know me. We said our hello’s and started catching up. I had met Linda a while back and so we were fairly comfortable pretty quick, and fell into an easy conversation. At some point, she mentioned that they now had a third roommate, and suddenly I felt like an idiot. I had invited Sophie and Linda to dinner, but I had totally forgotten that they had a third roommate now. Wow – that must be an awesome feeling to have both of your roommates taking off for dinner but you weren’t invited. . .  When I realized that I had screwed up, I encouraged Linda to call her and invite her to join us, but it was a bit too late at that point and she essentially had no chance in hell to join us. . .
Linda and I had been talking for about twenty minutes when she pointed toward the door.
“Sophie is here!” She said, waving to her as she had to me.
I looked, but ultimately I had to take Linda’s word for it as I was wearing contacts that allow me to see up close, but turn everything at a distance into a blur. That’s right folks, my vanity is so bad that I’d rather be damn near blind than to wear my glasses. Of course if you have ever taken a look at my flickr site, you already knew that my vanity was out of control, didn’t ya’? Anyway, eventually the blur coalesced into Sophie, and we had us a little hug fest. We spent the next few hours talking about nothing and everything, and this and that, and sharing our tales. I don’t recall most of our conversation, though I do recall telling them one of my least flattering stories from my much younger and dumber days that I won’t repeat right now because it would triple the size of this blog, and let’s face it, it is already shaping up to be a long one.

It became evident fairly quickly that Sophie and Linda both knew our waiter fairly well, as they were joking and laughing, and he had a clue what drinks they wanted before they ordered them. He was a good waiter – checking on us from time to time while not becoming a pain in the butt. I’d have to think that that must be a difficult balance to achieve, but he had it down pat. Toward the end of the night, Sophie stopped him as he was making one of his “flybys”.
“Would you do us a favor and take a picture?” She asked him. 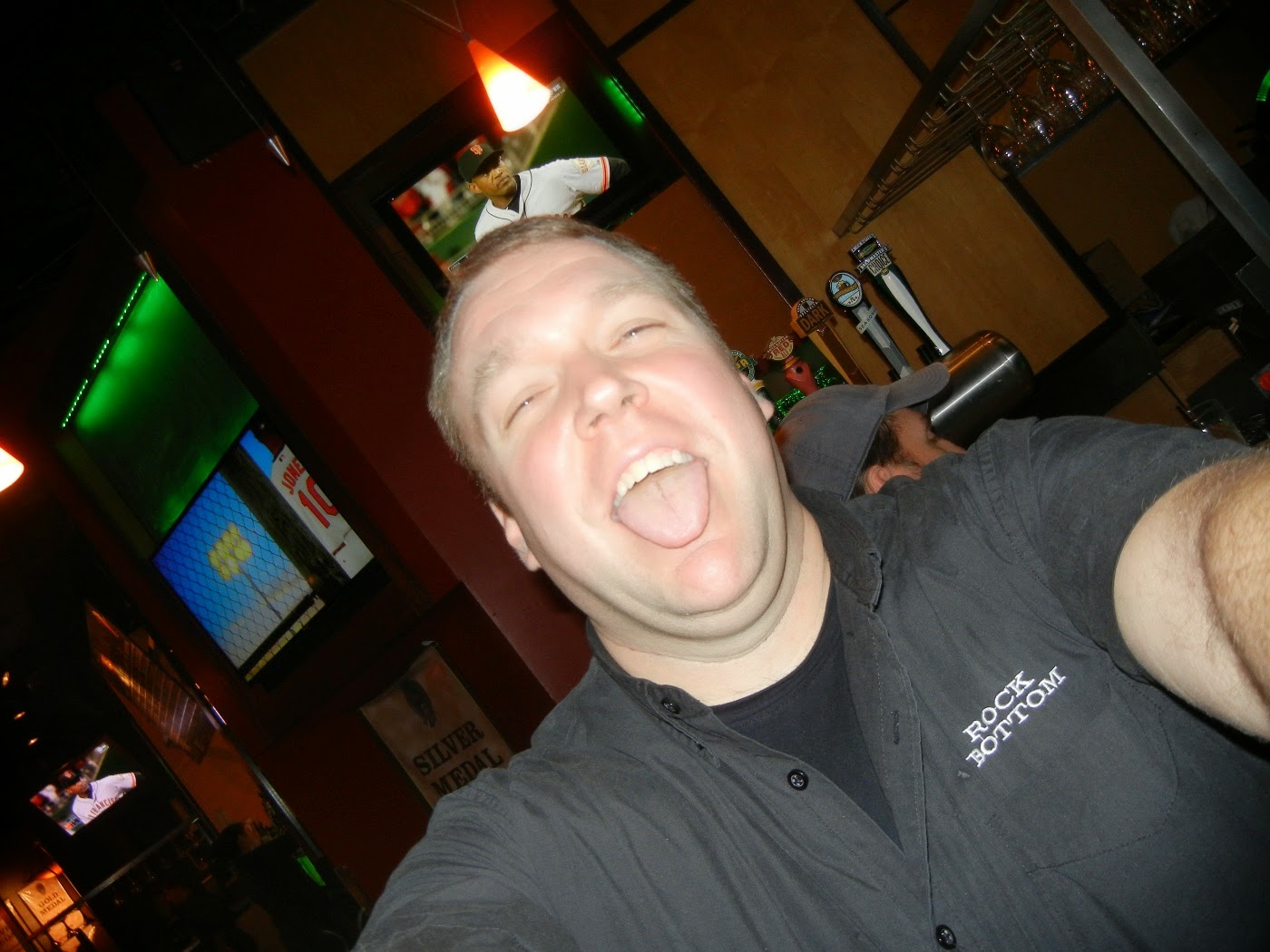 “Well sure!” he agreed enthusiastically, and so I turned on my camera and handed it to him, making sure to show him where the trigger switch was. He took the camera from me, gave us all a shit eating grin, and then turned the camera around and started taking “selfies” with it! Imagine the nerve! I mean what kind of egotistical, narcissistic, and self-aggrandizing individual takes their own damned photograph?! Oh – hold on a sec – scratch that thought . . . Of course we all laughed like hell before either Sophie or Linda told him that that was not exactly what we had had in mind.
“We were sort of hoping that you would take a picture of us!”
“OHHH!! Well why didn't ya' say so?!” he said ‘apologetically’ and then was kind enough to take several photos of us.

Oh, and on the way outta the restaurant? Yeah – I almost tripped on my own damned shoe again. How the hell DO women walk in pumps without falling on their faces anyway?!
Posted by Kimberly Huddle at 8:48:00 PM