Well you haven’t heard much from me these days, and that’s probably just as well as pretty much all that I’ve got to share is whining and moaning. I know that I’ve mentioned this horrid little skin condition that have before - Erythema Nodosum.  My current bout with this crap is by far the worst that it has ever been, and my legs are probably 50% covered in these large and painful bruises and bumps, and this time I even have about half a dozen “bonus” bruises on my arms, even though the disease usually limits itself to the legs. Saying that I “hurt” everywhere is kind of like saying that fire is “hot” – it is a significant understatement. So not only do my legs hurt very badly, but they are swollen and covered in these horrible dark red, black, and blue bumps that just look horrible. Needless to say, this doesn’t really motivate me to get all dressed up and try and pass myself off as pretty.
This service call was probably one of the harder service calls that I’ve ever made. Harder not so much for the work that had to be done, but for the stress that was involved. The customer had major problems on their end that we had to iron out, and then after we worked out their bugs, we found problems in each of the three systems that my company had provided. Other than the fact that my legs hurt so bad, the physical work itself was not so hard, but the mental anxiety and stress of trying to troubleshoot and repair all of these issues at a high profile customer like IBM was a bit of a bear.
On this trip, I was stuck away from home for almost two entire weeks and so I did eventually decide to try and spend some time “as Kim”. Not much I could do about the pain, but I was reasonably happy to find that a pair of tights at least hid the nasty colors of the bruises. Believe it or not, this was the first time that I have ever worn tights, and while I was happy with the look, I wasn’t all that thrilled with how hot the darn things are!


The first time I got out was over the weekend, and I went to see a couple of movies. The movies must not have been terribly interesting though, because I can’t even remember what they were now. I do recall getting all of the usual grins as I was buying my tickets, drink, and popcorn though. 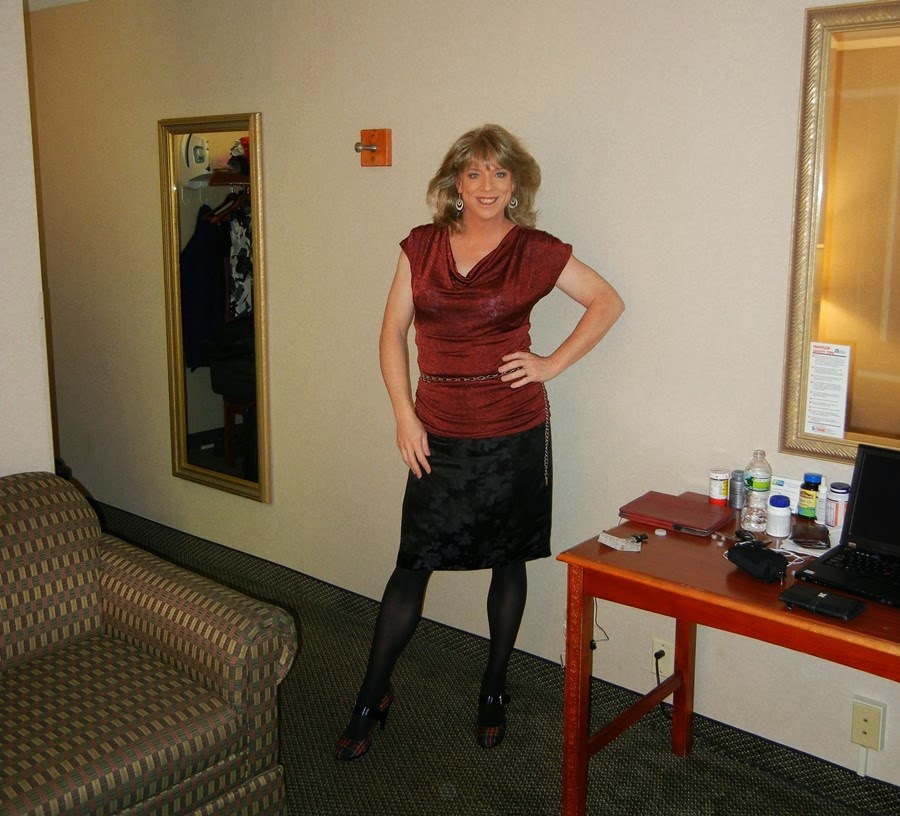 As I was getting ready and “putting on my face”, I once again suffered from the overwhelming feeling that I looked horrible. Every day I see more wrinkles, and I’m sure that it comes as no surprise to anyone that reads my blog, but I am pretty much obsessed with my hatred of what age has done to my face. In a pleasant surprise though, when I was all done and got my hair together, I was actually fairly pleased with my appearance!

The next time I got out was when making the trip from Fishkill to Albany New York the day before my flight home. Since I was booked for a 620 AM flight, I made sure that I got a hotel near the airport the night before my flight, so that I didn’t have to get up at 2AM to make the drive. Anyway, I made the one and a half hour drive “pretty”, and wore a dress and shoes that I had just bought at a Marshalls that week. Quite honestly, I don’t think that the dress flattered me too much. I thought that the shoes looked awesome, but I had a lot of trouble walking in them due to the height of the heels. With the fact that I just wasn’t used to wearing heels that high anymore, combined with the way one of my ankles was swollen with one of the bruises I mentioned, I was walking far less than gracefully. I really should have chosen shorter heels even though I very much wanted to try my new shoes. 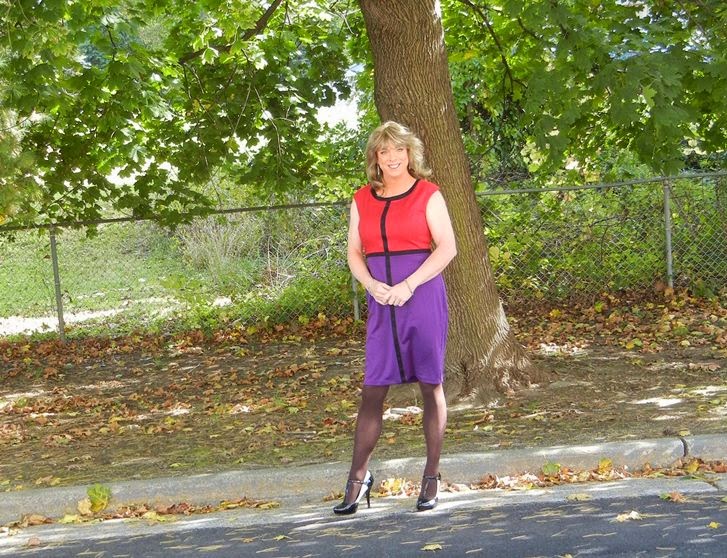 So, odds are good you wont be seeing a whole lot of activity on my blog for a while, and for that I apologize, but I’d rather write nothing than to have folks start thinking that I do nothing but whine and complain! When my skin condition relaxes a bit and doesn’t hurt so bad, I’ll probably get back on the horse. Until then, y’all have fun out there~!