Well hell – I don’t really have a damned thing of interest to talk about but I sort of feel like I ought to write a blog just to let everyone know that I am still alive and kicking.
I have made several trips since my last blog post, but none were made “pretty”. By the way! Did you notice that I usually put the word “pretty” in quotes when I speak of flying pretty? This was to kind of make it clear that I am using it a euphemism for “flying cross dressed”. The phrase “I made the trip cross dressed” doesn’t exactly roll off the tongue, nor is it in the least bit light hearted or amusing, and so I typically just say that “I flew ‘pretty’ “. Why am I telling you this? Because I apparently hit someone’s raw nerve with the phrase on my post “How to fly pretty”, and she made it a point to let me know that I was hurting women the world over with my use of the phrase and the stereo type that it reinforces. OUCH. . .
The reality is, we are talking about the World Wide Web here, and just about anything that you say or post there is bound to irritate someone, somewhere. It still kind of bugs me though because I know that she does have a bit of a point. I don’t particularly want to reinforce the stereo types that women must be pretty any more than I want to reinforce the stereotypes that men must not be.  In this case, I think it comes down to the intent behind my use of the phrase and I would hope that it will be kept in perspective. Eh, I don’t know if her comment should have hurt me or not, but it did . . .

You know I hate going to the doctor’s office, and especially hate paying the damned bill, and so I usually wait until I have either a serious problem, or several issues that I want to discuss. This time, I had an infection that I was pretty sure was going to need antibiotics and so off I went. As long I was there, I discussed several other issues that I was having, and this resulted in blood being taken, and tests being made. The end result was no particular surprise to me – I have very low testosterone. No worries though, because of course they have a drug for that, and so the Doc gave me a couple of prescriptions and off I went to the drug store. The antibiotics of course were no problem, but the big “T” totally flabbergasted me – the insurance company not only said “No”, but said “HELL NO!”. When I got over being shocked, I figured what the hell, I need it, and so I’ll pay for it myself! Well, that lasted right up until they told me what the stuff costs – over $500 dollars per tube, and presumably I’d need several before it was all over. At that price tag, I decided that I didn’t really need physical stamina, healthy muscles and bones, or a sex drive after all. With so many relatively serious side effects stemming from the issue, I don’t know how insurance can get away with just saying no, but there you have it!
Do y’all recall that my wife and I loaned her car to the father of my daughter-in-law? He had just got a good job and was going to lose it if he couldn’t get transportation to work and back, and so my wife and I talked it over and then took him the car for a few months. Just my luck, but after he had had it for months, it was wrecked less than a week before I was to go pick it up. A woman with a suspended license apparently thought that she was too good to wait for traffic, and tried to make a left turn in front of oncoming traffic with predictable results; she was hit by two cars, one of which was mine. My in-laws were shook up and on the verge of shock but otherwise all right, but the car is totaled. Honestly, the car being totaled kind of pleases me, because I hated the darned thing. It was a Dodge Caliber that we had purchased a few years ago because it had seemed like an intelligent car to get, with a good amount of room, and good gas mileage. The thing is, its mileage really wasn’t all that good, it’s suspension sucked from day one, and it had already been wrecked once.  As long as no one was hurt, and the responsible party had insurance, I considered it to be a blessing that the darn thing was totaled and the insurance company would have to give me its book value.
(Note:  I literally just received the check from the insurance company between typing the last two sentences! YAY!)
It has been a pretty scary few months trying to use my classic Mustang as a daily driver while my wife’s car was on loan. The Mustang is over 46 years old and something new was going wrong with her pretty much every couple of weeks. Add to that the fact that I can’t get full coverage insurance on her unless I agree not to drive her more than about two thousand miles a year, and you have the makings for a nervous breakdown each and every time I drove her to work or to the airport. Now with my wife’s car totaled, I suddenly found myself in need of a more practical car and so it was time to do some car shopping!
I had pretty much decided that I was done choosing cars that were supposedly an intelligent buy, and this time I was gonna go for a car that I didn’t mind making the payment on – a modern Mustang! I have rented modern Mustangs several times in the last few years and really liked them. They feel solid, well built, and have plenty of get up and go. The price really isn’t half bad either, given the quality of the car, and they get surprisingly good gas mileage.  Of course you have to remember what I’m comparing them to when it comes to gas mileage – my 2002 F150 that gets 16 to 17 MPG, and my classic Mustang that gets 13 to 14. A modern Mustang that gets an average of 24 MPG is a fairly dramatic improvement by my standards. Oh, and if you wanna see some funny looks on people’s faces, try driving a 46 year old classic Mustang into a Ford dealership!  Half of them rush to you to talk about the car, and the other half rush away, prolly terrified that you’re gonna try to use it as a trade-in.
I spent a couple of days doing some homework online, and so far the best deals I’d found online were from Avis and also one from a huge local car dealer. Avis looked like a pretty good deal, with a base 2012 six cylinder going for around $22,000. The local dealer had a 2010 6 cylinder with all the bells and whistles for about $19,000.
I spent the day going from dealership to dealership, and most of the stops went much the same, with salesmen eagerly staring at my classic as I parked, followed by a good ten minutes of oohing and awing over her, and then being told that they couldn’t beat the deals that I’d found online. At long last, I stopped at Mak Hiak Ford where I hit pay dirt! They had a red 2012, 6 cylinder Mustang with all of the bells and whistles going for $19,000 and boy is she pretty!

So what do y’all think of my Ford driveway and its newest edition? I like to sort of think of them as mother, father, and baby: 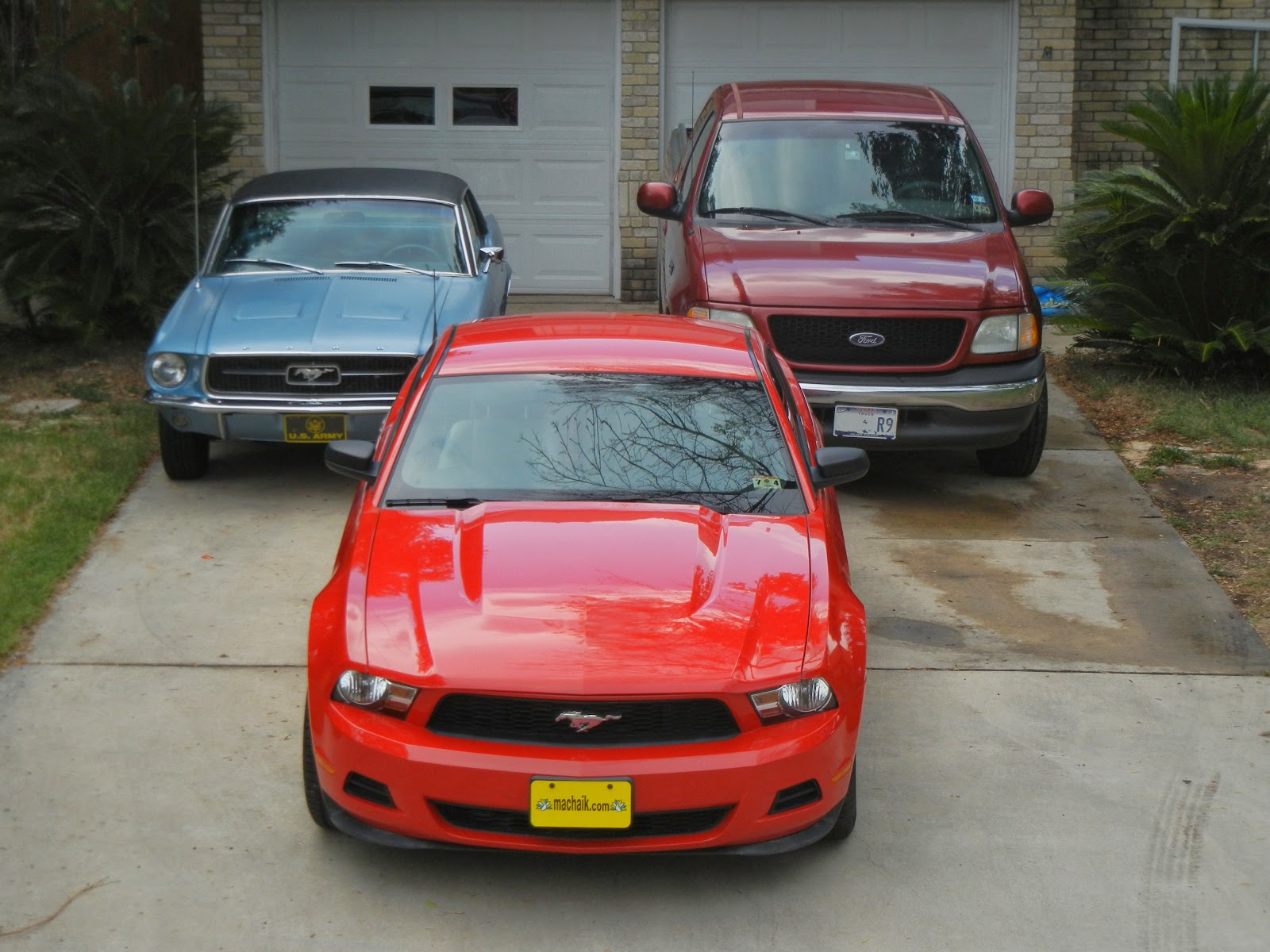 Oh, and do you wanna talk about good timing? Yeah, as I pulled out of that dealers lot with my classic, the suspension was making an AWFUL knocking/Creaking sound. I haven’t had the heart to crawl under her yet to see what’s wrong now, but it seems to be a good time to have another car to fall back on!

Things are so slow in our industry right now that my company shut down for this entire week to save money. They have done this a few times in the last couple of years and it is kind of a mixed blessing. On the one hand, it is scary as hell that the entire company is better off shutting down for a week than working, but on the other hand, I’d rather have them do this than to start laying people off.  My father-in-law, a mason, was complaining that his current job was killing him since it was in really rough terrain, where he couldn’t get his truck, equipment, or materials anywhere close to where the work had to be done. This left him facing the need to carry over two tons of large rock and other supplies by hand several hundred yards up and down steep hills in the over 100F Texas heat. I figure what the hell, I owe him for all of the things he has helped us with, and so I volunteered to help him out for the week. He looked at me with a bit of skepticism as he knows that my job is not physically demanding, but he was desperate and accepted my offer. I have got to tell you, that was a pretty tough week, because it was damned hard work, and damned hot weather to do it in! Still, there was no way in hell I was going to look bad in front of my father-in-law and his colleagues, and so I got into my best old Army mentality and did my best to kick it’s ass. I moved the vast majority of that two tons of rock myself, and then spent each day playing “helper” for him and trotting all of his equipment back and forth every day, keeping him stocked with rock and mortar,  and learning a bit here and there from him. At the end of the week, he told me at least a dozen times that he was both deeply grateful and deeply impressed with how hard I had worked. Most of the men that he had hired through the years hadn’t come close, and considering that I usually make a living sitting behind a desk, he was more than a bit impressed.  What I didn’t tell him was that I was so exhausted that I’d come home, showered, eaten, and gone straight to bed by about eight every single night. But hey, it was mission accomplished – I’d finally got the chance to repay a little of the hard work he had done for us and managed to impress him while I was at it. The thing is, I almost wish that I hadn’t, because now it absolutely haunts me to know how terribly hard that poor man has to work for a living. He is almost 70 years old, and trying to keep up with him for one lousy week completely kicked my ass. I just can’t understand how he can do this day after day, after having fought cancer twice, surviving a major motorcycle accident that almost took his leg, and having four hernia operations, and all of this in the last decade. I gotta tell you, my getting paid well to travel the country in air conditioned airplanes and airports looks REALLY good right now!
Posted by Kimberly Huddle at 11:08:00 AM