Teree, Out in Austin, and Music


So in a rare turn of events, my wife and daughter spent the week and weekend at my sister-in-law's house out of town. As you might expect, I took advantage of the situation to do a few odds and ends and to go out in Austin on Friday and Saturday nights. I recorded a video in boy mode playing what I have so far of a song I'm writing for my daughter. The image is TERRIBLE as I failed to consider the bright lights behind me, but the audio is still good so I went ahead and uploaded it to Youtube. A reminder though, it is not finished so don't get annoyed when it leaves you hanging:

Bright blue eyes, a lot like mine
Always searching, hoping to find
That fairy tail unicorn that flies

Mermaids swim, and flowers sing
A prince will save you from evil things
All this I see, in Audrey's eyes

Good guys win, the bad guys fail
The pure of heart can break evil spells
This is the world of Audrey's dreams

That's all I've got so far! I'm thinking about the next verse including something like:
Furry Critters, with tails and wings
Help little girls in their time of need

I'm having visions of the little animals helping Cinderella make her gown! I just need to flesh it out a bit more to work it in.

I redid the video but it will take some time to put it together and replace this poor version. I also recorded a couple of other song ideas I'm working on and will upload them to Youtube in the next few days. If anyone has ideas where to take any of these songs, feel free to share. It doesn't have to be the exact words, it's more important to come up with idea's to be expressed. Once I get the ideas, I can figure out the wording.
People finding my page on Youtube are going to be awful confused as to my gender - welcome to the club! My profile is female, my voice is male, I've got some male video up there and will soon also have a couple of me in female mode . . . with a male voice! That ought to keep 'em guessing!
So after I made all of these videos I just spoke about, I drove down to Austin where I finally got the chance to meet Teree Webster in person. She and I have been chatting online for a year or more, but every attempt we have made to actually meet each other in the past has failed.
I stressed a bit over what to wear as Teree's pictures have always shown her to be a classy dresser. Usually people say much the same about my attire, but my problem was that I wanted to wear a mini skirt but didn't want to make a poor first impression! 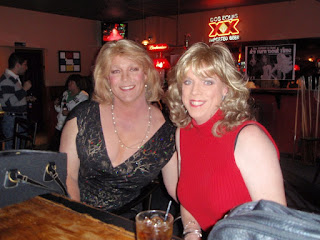 So we met at 'Bout Time in Austin on Friday night. Teree is gorgeous – the woman looked like a million bucks! It's funny – I thought she looked incredible but she complained that she didn't think she was passable. With my usual subtlety and brilliance with words, I told her something along the lines of:
"Your Nucking Futs. You look awesome!"


We talked for an hour or two, trading stories and laughing. Eventually we got a little bored with 'Bout Time and I asked Teree if she wanted to risk her life and go to a "straight" club called Graham Central Station a few minutes away where they have something like four different bars/clubs in the same building. She said that since I convinced her that she looked good enough, she would take the risk! Of course she added that if we got assaulted, it would be my fault for convincing her she could get away with it. So as we were walking through the huge and PACKED parking lot, Teree looked at me and said something along the lines of:
"Wow this place is packed. I would be nervous if you hadn't already been here!" I glanced over at her and laughed as we were approaching the door.
"Umm, I think you misunderstood me. I was here a year ago in boy mode. I've never done this before either!" We both just laughed and kept on going! Everyone treated us terrific and we had a great time. We walked around and explored the place a bit, and then settled into the area where they were doing Karaoke. They have a couple of people sort of working the stage trying to get people excited and involved, and it really was a cute show.
See The Video
At one point, a couple of the staff got on stage, with one of them in a VERY campy drag outfit. I choked and almost spit my drink at Teree as we gave each other embarrassed looks. I couldn't help wondering if that was for our benefit or if they would have done that act even if we hadn't been there.


We'd been there a bit over an hour when it struck me that I had a bit of a problem. I had to . . umm .. . well . . go potty? Any one that does not get out in the world cross dressed might not have thought about it, but this is sort of problem. The mens room is out of the question for at least half a dozen reasons, with the highest on the list being my desire to get through the night with out bleeding. Using the ladies room presents it's own risks. What if someone "reads" me and gets pissed off about it? This is a straight place and it's packed, mostly with country boy redneck types. I can't help wondering if I'm risking my life, but I headed for the ladies room. I was relieved to see it was not full and there was no line and so I got in and out, and none the worse for wear.
Not too long after I got back from the bathroom, I see this very pretty lady lean over and tell Teree that she looked great! Having a woman tell you that you look great is about the ultimate compliment for us, and yes, especially so if that woman happens to be gorgeous! I asked if I might take her pic for my blog, and she agreed and posed with Teree: 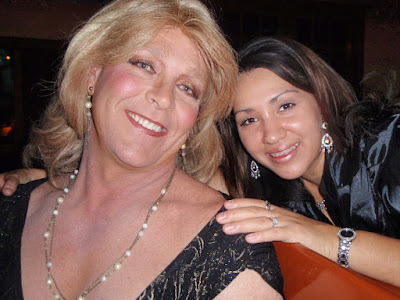 I went up to the sign up sheet for singing probably half a dozen times but kept chickening out. Yes, I do karaoke a lot, but NOT in straight clubs where there might be people I know in the crowd! At last I got up the courage and put my name on the list. It was right about then that Teree told me it was 1AM! Considering that I had to be up the next morning to get my face burnt . . . err . . I mean my laser treatment to kill my facial hair, I decided to call it quits and left before I got the chance to sing. Probably just as well!


The next day (Saturday) I had my laser treatment. This is a good news / bad news thing. Yes, it's killing that damn beard, but wow it hurts. It hurts AND it makes my face swell up and get lumpy. For a while, the swelling was so bad that I was worried I wouldn't be able to go out that night. Eventually the swelling subsided and my face went from feeling like it was on fire to just a bad sunburn. Spent the rest of the day doing the "Mr Mom" thing – lots of house cleaning and laundry. What a glamorous life I live huh?

That evening I got ready at the house and then tried to record a few more songs – this time without the bright light behind me! I have to do some work before I can load those videos to Youtube though because I tried to get clever when I made them. I used my little digital camera to record the video, but it's audio is awful. To get around that problem, I used my digital recording studio to record the audio. So to combine the two I have to do a lot of work. I have to:


Get the video off my camera and into my PC
Convert the video to a format that my Microsoft movie maker recognizes.
Burn the audio to a disk to get it out of my studio (it's a little older and that's the only way to get the data off it).
Rip the audio disk into my PC
Combine and synchronize the audio and video in MS Windows Movie Maker. 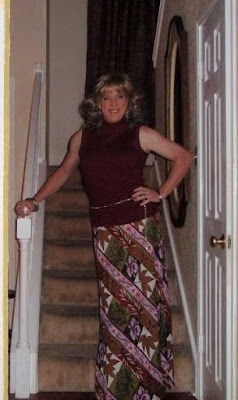 Like I said, lots of work to do before I can upload them.
Went out again to 'Bout Time where I again talked with Teree, met some old friends, and some new ones. I have no idea who picks the music they play, but I thought it sucked. I bribed the DJ with a tip to play an ABBA song "Knowing me, knowing you". Yes I know it's cliché for a cross dresser to like ABBA, but I've always loved them. Once my song played, they went back to playing stuff I hated so I went out to the car, grabbed my guitar, and took it out to the porch area where all the smokers hang out. Played guitar for about an hour and a half and sort of enjoyed myself. Had a few folks that sang along and several more just listened. I stayed out way too late considering that I hadn't got much sleep the night before and so had a lot of trouble staying awake for the drive home.
I really enjoyed meeting and talking with Teree and suspect and hope she and I will be good friends.
Posted by Kimberly Huddle at 6:05:00 PM