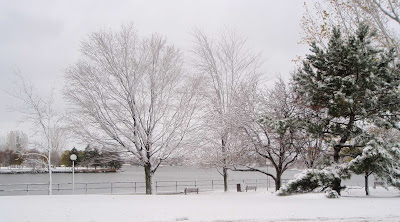 So this weeks trip was to Ottawa / Quebec Canada. (My customer was in Ottawa and my hotel was in Quebec). I'm really not fond of international trips as customs, immigration, getting local currency, etc are such a pain. I did not fly femme as I didn't want to add any more hassle to the trip then I had to. Had a long day getting there and arrived at my hotel at around 7PM and decided I wasn't going to do anything that night. My last name (my REAL last name, not Huddle) is of French origin so as soon as people in Quebec saw my last name everyone tried to speak French to me! I felt like an idiot, but I played hell finding the parking garage for the hotel. I drove by it three or four times until I saw another car approach what I thought was a warehouse door just to see it automatically open exposing the parking garage inside. Hmmm . . . one more thing learned about city life.
The view from my room was very pretty so I took a few pics: 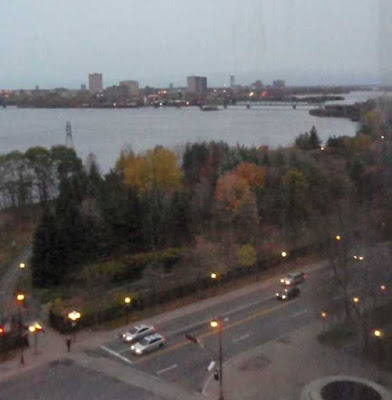 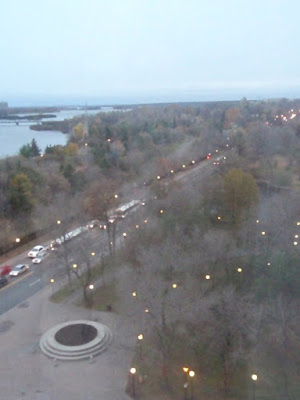 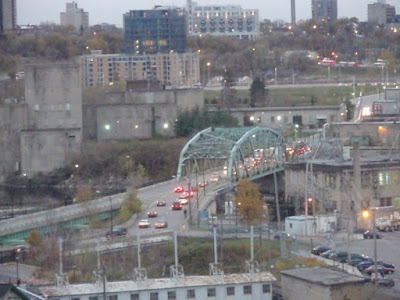 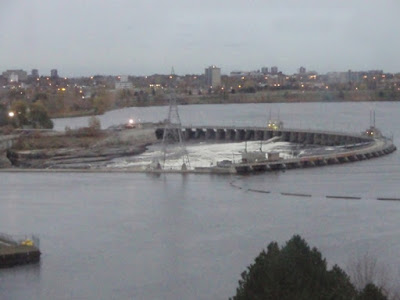 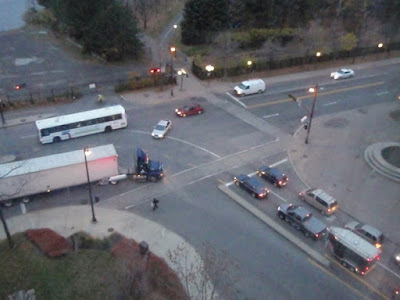 Work went well my first day there and I was back at the hotel and getting dressed at 6PM. I decided to try my new wig and spent over an hour trying to make it look presentable. I like it but it sure does take a lot more effort to make it presentable after pulling it out of luggage than my short wig did. I'm hoping that maybe that is something that gets better as I get more practice working with it. 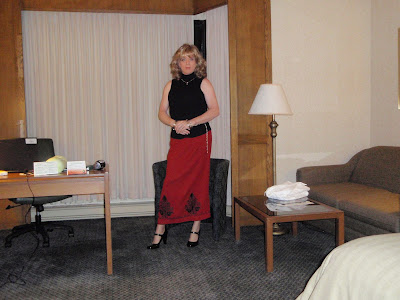 Just my luck that they decided to have a snow storm while I was there. Made for kind of miserable driving but it sure was pretty to watch. There were a few TG friendly clubs I had found online, but I decided that given the predicted weather, maybe it wouldn't be a good idea to go too far or stay out too late, so I settled for the Casino that was about 2 miles away. As I was leaving the hotel and entering it's parking garage, I saw a man coming in struggling to open the double doors and deal with his baggage, so I held one set of doors open for him and waited. Instead, he took one look at me, smiled and dropped his bags, and held the door open for me! He spoke French so all I got was "no, no, no, (lots of words I didn't understand) mademoiselle" I felt kind of guilty but thanked him and walked on to my car! The snow started to fall very heavily on my way to the Casino so I tried to take a couple of pics. 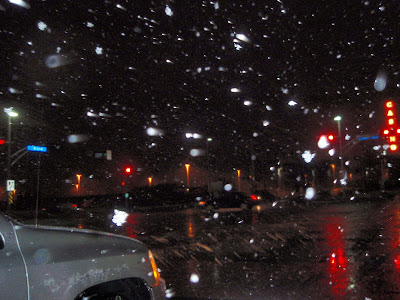 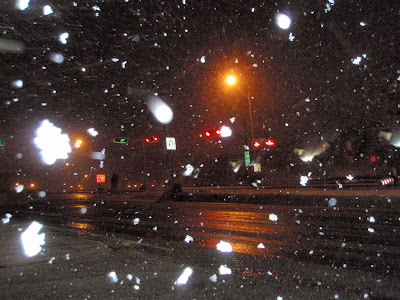 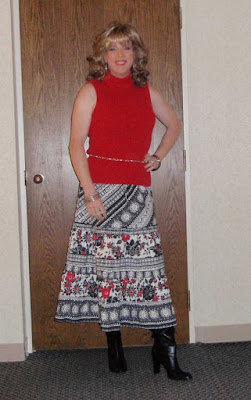 Nothing terribly interesting happened at the Casino, which I suppose is good. No one gave me any dirty looks or anything like that. I lost my $40 dollars quite rapidly and headed back to the hotel. I stood at the entrance to the hotel restaurant for about 5 minutes waiting to be seated. This had nothing to do with my being dressed as they had done the same thing to me the night before when I was in drab.

So there I stand waiting to be seated when a gentleman that is seated and eating his dinner notes how long I've been waiting. He stands up and calls angrily to a waiter in a different part of the room. Like the man who had held the door for me, this man also speaks in French so I don't understood him, but his tone is angry as he points at me and I again catch the word "mademoiselle". Considering this is really quite a nice restaurant and hotel, he must have been pretty angry to yell across it. I gave him my very best smile and thanked him. Wow, that's twice on this trip that I have been treated so well. This is very welcome as my confidence has been faltering a bit the last few weeks, so it was kind of nice to get some positive reinforcement. After being berated by the other patron, the host practically ran to speak with me. The bad news is that it was 5 minutes to 10PM and that is when they stop serving. I guess I could have made a fuss, but figured that I could stand to miss a meal or two.


My next (and last) day there everything also went well for my work. A very nostalgic day for me as they are setting up a new service center there just like the one I built in Austin a decade ago for my company. Brought back many fond, and not so fond, memories! Succeeded in repairing the instruments I was there to work on very early and spent most of the rest of the afternoon giving some improvised training to one of their engineers. Once their manager realized that I had built and managed a service center for years that was just like what they were trying to get off the ground, they wouldn't let me out the door until they had picked my mind clean for hours!


Eventually I DO get free and so return to the hotel and get cleaned up. By the time I'm ready, it's 7PM and I have to be up at 2:45 AM to get to the airport in time for getting through customs and all that garbage, so I again decided to leave the clubs alone and just go to the Casino that is so close by. At first I was gong to wear these boots out. Ultimately I decided that I didn't feel pretty in them and so they stayed home and my Mary Janes went with me. 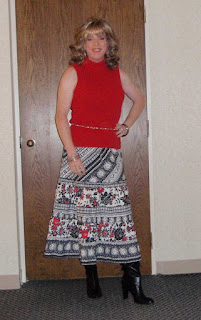 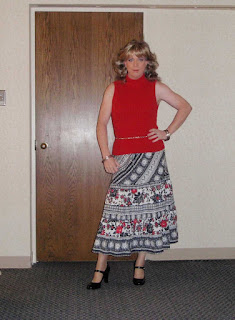 Again nothing of any note to mention on my trip to the Casino. I once again lost my $40 quickly and efficiently and returned to the hotel. This time I got there a bit earlier and WAS seated and served in the restaurant!
Still looking for a way to add a little variety to my pictures. I kind of like these:


Oh, you know what? I think I'm gonna have to learn how to speak French. It sounds so beautiful, especially when coming from a pretty woman.
Posted by Kimberly Huddle at 6:03:00 PM